Gardaí say they are treating discoveries as a ‘family tragedy’ 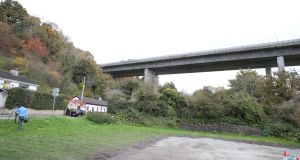 The bodies of a woman and a baby boy were found in separate locations near Lucan in Co Dublin on Thursday.

Gardaí are investigating the circumstances surrounding the discovery of the body of a woman on the Lower Road in the Strawberry Beds and the unexplained death of an infant boy at a house in Lucan.

“At this stage investigating gardaí are treating these incidents as a family tragedy and are not currently seeking anyone else in connection with the deaths,” the Garda said in a statement.

The statement said: “At approximately 3.45am on 22nd October, 2020 following reports of a pedestrian seen acting suspiciously at the M50 (toll plaza) bridge, gardaí discovered the body of a woman at Lower Road, Strawberry Beds.

“Following this incident gardaí went to a house in Lucan where an seven-month-old baby boy was found in an unresponsive condition. He was pronounced dead at the scene a short time later.”

The statement added that an incident room had be established at Lucan Garda Station and a technical examination of the scene had taken place. The Coroner and Office of the State Pathologist have been notified.

The body of the baby has been taken to Crumlin hospital where a postmortem was carried out on Thursday afternoon. The Garda said in a statement on Thursday evening the results would not be released for operational reasons.

It said a postmortem would be carried out on the woman on Friday.