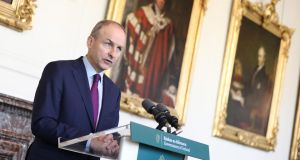 Taoiseach Micheál Martin has said he was ‘annoyed’ at not being told directly about the contact tracing issue. Photograph: Julian Behal Photography/PA Wire.

Taoiseach Micheál Martin has said he is opposed to introducing curfews as part of the State’s response to the spread of Covid-19.

“I am not really the curfew type,” he said on Thursday saying he did not see it as part of the response to curbing coronavirus.

Mr Martin did accept that curfews had been introduced elsewhere but said those countries have had difficulties that Ireland has not had and were therefore doing things differently.

The Taoiseach was speaking at a press conference at the end of a video conference on a Shared Island.

Mr Martin said he was “annoyed” at not having been told directly by the HSE about the contact system being overwhelmed for three days last weekend. An estimated 2,500 people with confirmed Covid-19 diagnoses were told by the HSE they would have to contact their own close contacts because the HSE contact tracing operation had been unable to deal with the volume of work it encountered at the weekend.

Contact tracing, as well as much of the HSE, he added, were working under severe pressure due to the sharp rise of numbers. He said there were 400 people working on contact tracing at this moment and that was going to quickly move to 800.

He said the HSE was now confident it could deal with the close contacts of 1,500 confirmed cases each day. He said the strength of the test, swab and trace operation would be increased to 3,000.

He also argued Ireland’s testing system was strong with capacity for 120,000 tests per week. He also said the Government would be in a position soon to learn if antigen testing (which is a rapid test) could play a part.

“Over 1.5 million people have been tested and we will continue to resource that side of that,” he said.

He also strongly defended the decision to keep schools open saying that 96 per cent were unaffected. While saying he would take on board the worries people have, he argued that without a formal educational structure “all the research shows that children lose out significantly especially from disadvantaged backgrounds.”