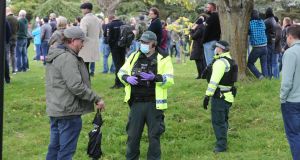 A police officer talking to an anti-lockdown protester on the Stormont estate in Belfast at the weekend. Photograph: Niall Carson/PA

The police in Northern Ireland have dealt with almost 3,000 breaches of the coronavirus regulations since the beginning of the pandemic.

According to the latest figures from the Police Service of Northern Ireland (PSNI), 2,885 notices were issued from March until midnight on October 18th.

These include 1,474 fines – mainly of £60 – for breaches of public health regulations, and 1,032 warnings, known as community resolution notices.

Prohibition notices have been issued against 75 licensed premises and 264 private dwellings, and 40 people were fined £1,000 for failing to self-isolate after returning to abroad.

Within the last week, police issued the first fine in the North for not wearing a face mask after an individual failed to follow the law regarding the use of face coverings in commercial premises.

The chairman of representative body the Police Federation for Northern Ireland (PFNI), Mark Lindsay, warned it was “unrealistic” for the police to take sole responsibility for enforcing the regulations, and called for it to be extended to local councils and the retail sector.

“We are the line that has to take the enforcement action,” he said, “but I think it’s a matter for retailers to be involved in this, and for councils and wardens in certain areas.”

Citing the example of dog fouling, he said: “It’s not the police that enforces this. So I think there are other methods of doing it, and certainly we will always be that last resort if someone needs to be arrested . . . but we have been the people who have had to step up.

“We’ve all a role to play in this, but I just think it’s unrealistic to expect the police to deal with it all.”

There was also “frustration” among officers, he said, at the frequent alterations to the regulations. “It makes it very difficult at times for police to carry them out, in that they change on an almost daily basis at times.”

Separate data from the PSNI showed that on Wednesday, October 21st, 457 police officers and 84 police staff were self-isolating at home due to coronavirus. This represents about 6.5 per cent of the PSNI’s 6,930 full-time officers.

Assistant Chief Constable Alan Todd said “extensive and robust business continuity plans” were in place, but Mr Lindsay said officers were concerned that if individual teams of officers had to self-isolate it could have an impact, as happened earlier this year when Antrim and Newtownabbey police stations had to close due to coronavirus.

“The big worry within the police service is that if entire teams are taken out, the resources fairly quickly start drying up,” he said.

Mr Lindsay also said officers were concerned about their own health and that of their families, particularly in regard to a protest against the coronavirus restrictions by about 300 people at Stormont at the weekend.

People were “blatantly breaking the rules,” Mr Lindsay said. “They knew there would be police action, but they still went on to do it.

“It puts us into this difficult position where you have a contagious virus and police officers once again are stuck in the middle of it . . . it could easily be prevented if people would just go by the regulations and the law.”