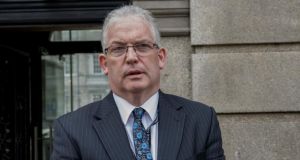 A struggle between the Health Service Executive and the Department of Health at the highest levels over how the €15 billion spending plan for the health service this year should be presented to the public is revealed in internal correspondence.

The documentation illustrates that the HSE wanted to emphasise, in the published plan, concerns that it did not have enough money for services in 2018, while the department objected to such “negativity” and instead wanted it to highlight positive issues such as new developments which were to be funded in the year ahead.

“The overall tone of the document is overly negative and needs to be reworked,” was one remark attributed to the department’s secretary-general, Jim Breslin.

The behind-the-scenes wrangling between the HSE and the department over the contents of the service plan was articulated in correspondence late last year seen by The Irish Times.

The department told the HSE not to be overly focused on a proposed €3 billion transition fund earmarked as one of the key building blocks of the Sláintecare health reform programme as this fund has not yet been agreed by the Government. It urged the HSE to be “more nuanced” in the language it used in relation to the Sláintecare programme.

The Sláintecare programme for reform of the health services over a 10-year period was drawn up by an all-party committee in the Oireachtas last year and has been backed by the Government.

In a draft of his foreword for the 2018 service plan, HSE director-general Tony O’Brien said the work which had gone into planning for this year had been challenging “as it is developed in the absence of an agreed implementation plan and transition funding for Sláintecare”.

The department claimed Mr O’Brien was “overly focused on a transition fund”. “This has not been approved yet.”

The Sláintecare plan envisaged €3 billion being invested in a transitional fund to develop infrastructure such as IT/e-health and expand the provision of doctors and nurses.

The correspondence shows that the department also objected to moves by the HSE to specifically warn in the service plan that it “would be exceptionally challenging for the HSE to live within available resources in the coming year while maintaining levels of performance and protecting patient safety”.

The department noted this was “unacceptable language”.

The HSE national service plan is the official document which sets out precisely how and on what the executive intends to spend the money allocated to it by the Government each year.

The documentation shows the Department of Health was very concerned in the weeks running up to Christmas at what the HSE intended to say in the 2018 service plan. It was adamant that details of “assumptions” which underpinned the health budget for 2018 – including making no provision in the financial figures for up to €68 million in potential pay pressures or a potential charge of €170 million arising from an overrun in 2017 – would be left out of the publicly-released plan and referred to only in private correspondence.

A draft of the plan dated December 1st drawn up by the HSE – just a week before the final document was presented to Minister for Health Simon Harris – was heavily edited by the Department of Health, with swathes of text earmarked for removal or amendment. On December 4th the department told the HSE its draft was “overly negative” and that it needed to be “reworked”.

In a draft foreword to the report Mr O’Brien said that while the €14.5 billion budget for 2018 would see an overall increase of €587million over the original amount provided in 2017 “this was only €217 million above the current forecast cost of delivering services in 2017”.

The department, in an observation, maintained that this comment should have much less prominence in the foreword and that it should be “more temperate in its wording”.

In the chapter on primary care in the draft plan the HSE warned that the likely financial challenge for core services in this area was in relation to “the provision of support for complex paediatric discharges and virus reference laboratory services and will lead to an estimated overall financial challenge of €15 million before cost mitigation”.

“The alternative would be to reduce paediatric homecare and delay the opening of primary care centres,” the plan said.

It also warned that the HSE, as the statutory public provider, had a requirement to respond to need even if this exceeded what could be supported by any level of realistic efficiencies coupled with the available funding.

“Within acute services this primarily applies to emergency and maternity services and will lead to an estimated overall financial challenge in 2018 of €245 million. The alternative would be to reduce the level of inpatient and day cases by in excess of 40,000 and 300,000 respectively.”

The HSE said it would seek to target €46 million in savings as part of the first part of a value-improvement programme.

It said too that about €60 million of the projected €154 million deficit recorded in acute hospitals in 2017 was due “primarily to the actions of private insurers”. This is understood to be a reference to health insurers effectively advising subscribers against signing forms waiving their right to public treatment in hospitals in cases where they were not being offered private treatment or benefits.

In addition the draft plan said there was a residual deficit of €70 million in the hospital sector “which included unfunded cost pressures within drugs and other clinical non-pay [areas] including higher than planned elective activity to deal with long patient waiting times.

In a note in the margins, the department commented: “This is not what we are being told over the year. It is excess spending and savings not delivered. Overtime increases and no agency [staff] conversion [to permanent posts] etc.”

The final HSE service plan for this year published before Christmas was amended to take account of the reservations expressed by the Department of Health officials.