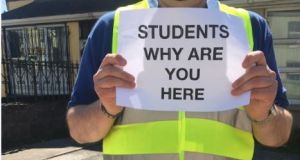 A resident holding a sign protesting at students returning to their rented accommodation in Cork.

Over 60 people living near University College Cork held a silent gathering on Sunday to highlight what they claim are breaches of Covid-19 regulations by students holding parties in rented accommodation.

Catherine Clancy, chairperson of the Magazine Road and Surrounding Areas Residents Association, said the problem had grown worse over the past three or four days with dozens of students arriving into the area to hold parties.

“It’s a huge problem - we’ve lived here all our lives, co-habiting with students and many of us are long term residents here for years, including some from an older demographic,” said Ms Clancy, a former lord mayor of Cork City.

“What we’ve had in the last few days is a major influx of students - the college is closed, they’re not working in the city, there are no nightclubs or pubs open and they’re not making essential journeys. They are only here to party.”

Ms Clancy said a number of parties on Magazine Road, College Road and Glasheen Road and nearby areas such as Hartland’s Avenue, Connaught Avenue and Highfield were attracting up to 50 people at a time.

She said there had been three cases in the last few days of gardaí being called after young people gathered for parties “in complete contravention of the Covid-19 regulations on social isolation,” she said.

“We’ve spoken to some of them and they’re telling us they are just getting out of their parents’ hair so they’re leaving their homes in other parts of the city and county to come here to party in rented houses.

“So you have three groups coming together, landlords, parents and students who are basically giving two fingers to the Covid 19 regulations at a time when we, as a community, are working hard to abide by the regulations.

“We had one couple at our gathering today who couldn’t go to see their grandchild because of the Covid-19 regulations and yet we have students coming into the area from well outside their 5km limit.”

Ms Clancy said often the young people end up staggering around the streets drunk and while the local community gardaí were working hard to address the problem, they were overwhelmed by the scale.

Ms Clancy said Sunday’s protest had attracted support from residents around the Lough and other affected areas and a further public gathering is planned for Monday.

“We’re going to have another gathering with proper social distancing at the junction of Glasheen Road and Hartland’s Avenue at 2pm on Monday to highlight the problem because something has to be done to address it.”

A Garda spokesman said gardaí do not have the powers to issue on the spot fines for breach of Covid-19 regulations and that gardaí can only bring a prosecution following the submission of a file to the director of public prosecutions.