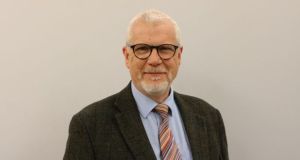 Normally the installation of a new Moderator takes place on the opening night of the Church’s annual General Assembly at Church House in Belfast before an attendance of over 900 people from across Ireland as well as representatives from the other churches.

This year’s General Assembly was cancelled in April owing to the Covid-19 pandemic. It is the first time in 180 years that the Presbyterian Church in Ireland has had to cancel its annual gathering. . The standing commission of the General Assembly will meet by video conference to conduct necessary business on Tuesday and Wednesday of this week.

It is intended that all appropriate health and safety precautions will be followed at the installation in Church House’s large Assembly Hall, including government guidance on social distancing.

The ceremony can be viewed at www.presbyterianireland.org with addresses from both Rev Dr Henry and his successor Rev Dr Bruce.

New Moderator Rev Dr Bruce (63) was ordained in 1984 and served in Ballymena Co Antrim before being installed in 1987 as Minister of Clontarf, Ormond Quay and Scots Presbyterian Churches in Dublin where he was until 1992, Since then he has served in Church administration at senior levels in Belfast.

Married to Zoe, a former schoolteacher, they have four adult children and two grandchildren.