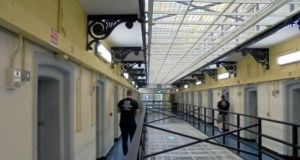 Prison authorities hope the transfers will significantly dilute the influence of Kinahan associates in Mountjoy.

Several Mountjoy inmates connected to the Kinahan organised crime group have been dispersed throughout the prison system to prevent them stirring up discontent over the coronavirus restrictions in the north Dublin facility.

Two sets of brothers, Gary and Glen Thompson and Scott and Mark Capper, were believed to be behind attempts to organise strikes in the prisoner population in protest against the strict restrictions which have so far kept the system free of coronavirus, also know as Covid-19.

Another man who is serving a sentence for a violent assault in Dublin was also believed to be involved.

The men, most of whom have been employed or associated with the Kinahan organised crime group, were unhappy with the movement restrictions as they have almost completely stopped the flow of illegal drugs into the system.

A ban on visitors and reductions in yard times for prisoners mean it has become much harder to smuggle drugs in.

The Thompson brothers are serving lengthy sentences for planning the assassination of Kinahan rival Patsy Hutch. Mark Capper was sentenced to seven and a half years last week in relation to the same offence.

Scott Capper, an associate of a Finglas-based criminal gang associated with the Kinahans, is serving three and a half years for assaulting a tourist at a nightclub, while the fifth man is serving a 27 month sentence for a knife attack in a separate feud.

The five men, along with a number of others, are suspected of trying to persuade prisoners to refuse to return from the exercise yard when directed on Wednesday and Thursday. Prisoners working in the kitchen were also instructed to go “on strike”.

However the scheme fell apart when the majority of prisoners refused to go along with the plan. Sources say that, despite some frustration, there is broad support for the current movement restrictions across the prison system.

The incident was first reported in the Sunday World and the Irish Mirror. All five men have now been moved to other prisons where they will have less influence over the prisoner population, sources confirmed on Sunday. A handful of other prisoners have been issued with disciplinary notices.

Prison authorities hope the transfers will significantly dilute the influence of Kinahan associates in Mountjoy.

Prison officers had been made aware of the planned strikes and had deployed personnel in riot gear. However it is understood no serious confrontation took place.

Ireland’s prison population is one of the few in Europe to remain free of Covid-19. Several prison officers have contracted the disease but to date no prisoner has been infected.

Cloverhill Prison in west Dublin has been designated as an isolation centre for prisoners showing symptoms of the disease. Other steps include the introduction of video visits and a mandatory 14-day isolation period for new committals.