Cavan continues to have highest incidence of Covid-19, followed by Dublin and Monaghan 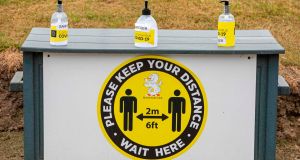 Six counties were free of new cases of Covid-19 over the past week as the virus continues to be suppressed nationally.

Counties Kerry, Meath and Sligo showed no increase in case numbers in the latest Health Service Executive epidemiological reports published on Sunday for the week from May 21st to 28th.

There was a drop of one case in the numbers recorded for counties Donegal, Tipperary and Wexford over the week. This is probably the result of a case being denotified when the cause of death was reclassified.

Counties Leitrim and Longford had just one extra case during the week, while Laois recorded two new cases.

Dublin, which accounts for over 48 per cent of all cases, added another 201 cases, and Cork’s figure grew by 52.

Co Cavan continues to have the highest incidence of the disease, followed by Dublin and Monaghan.

Another person in the 25-34 year age category diagnosed with confirmed Covid-19 has died, the recent reports from the HSE’s Health Protection Surveillance Centre show. There have now been six deaths in this age category, plus another death that is classified as possible or probable.

There was no increase in the overall number of nursing homes affected by outbreaks of the disease over the last week, at 257. The number of clusters in residential institutions increased by seven over the week to 184, while the another eight hospital recorded outbreaks, bringing that total to 102.

There were also an additional three workplace clusters; that total now stands at 43.

According to the latest HSE operational report, there were 182 confirmed cases of Covid-19 being treated in hospital last Saturday, plus another 188 suspected cases. Out of a total of 385 staffed critical care beds, 118 remained available.

Thirty Covid-19 patients were on ventilators.