Army officers evacuated from Goma after weeks of delay

No decision made on sending out replacements 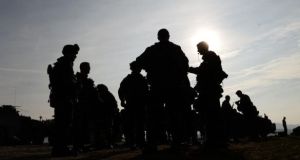 Two army officers are undergoing medical assessment today having been flown home from the Democratic Republic of Congo, several weeks after the Defence Forces first raised concerns about their safety.

The male and female officers, who had been deployed as observers in the eastern city of Goma, arrived in Dublin Airport this afternoon on an commercial flight.

Their evacuation had been delayed due to Ireland’s lack of long range air transport and the difficulties in chartering an aircraft. All other EU countries had already evacuated their peacekeepers from Goma due to the worsening security situation in the country.

Dozens of DRC citizens have been killed by Ugandan rebels in the region amid increasing political instability.

The instability has been exacerbated by the coronavirus pandemic which is seen by some as a western disease being spread by the 18,000 peacekeepers which make up the Monusco mission– the UN’s largest blue helmet operation.

The Defence Forces first raised concerns about the officers’ safety near the start of May, citing the fact that the officers lived in a private apartment rather than a secure compound.

There was also concern about the impact of anti-malarial medication they were taking. The medication is only supposed to be taken for six months at a time but the officers had already been in country for longer than that due to a UN ban on troop rotations during the pandemic.

As concerns grew, a proposal was put together to send out the Ministerial Air Transport Service, commonly known as the Government Jet, to bring them home.

However this plan was shelved due to concerns about the jet’s range. The Department of Defence said the trip would require seven overnight stops.

The Defence Forces has said it remains committed to the Monusco mission but that replacement officers will not be sent out for the time being. The three replacement officers have been instructed to be ready at short notice to enter quarantine ahead of deploying to the DRC but no decision has been made about when they will deploy.

Ireland’s commitment to the mission is usually three personnel. However one soldier had already returned home when the security situation started to deteriorate significantly.

“While there is no change to the Defence Forces commitment to this mission, any deployment must be informed by current United Nations protocols and access to the Mission Area, and within the context of the current challenges brought about by the global COVID19 pandemic,” a defence forces spokesman said.

A major barrier to flying the officers home commercially was their weapons. They could not bring them home on a commercial flight nor could they leave them behind unattended.

In the end the weapons were left with “friendly forces” after the ammunition had been expended at a range, a source said.

The officers returned home on a multi-leg Air France flight which arrived in Dublin from Paris at 2.3pm on Sunday. They were then taken to St Brican’s Military Hospital in Dublin for medical assessment.

After they are medically cleared they will be required to spend 14 days in isolation per HSE guidelines. This isolation can take place in their homes, a spokesman said.