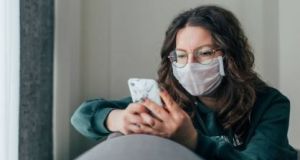 Researchers from NUI Galway and the University of Turku in Finland examined the habits of 294 randomly selected daily social media users around the world to see if they believed false or misleading claims online about coronavirus. File photograph: Getty

People who are constantly checking social media for the latest information on Covid-19 are more likely to believe and share misinformation about the virus, a joint Irish-Finnish study has found.

Researchers from NUI Galway and the University of Turku in Finland examined the habits of 294 randomly selected daily social media users around the world to see if they believed false or misleading claims online about coronavirus.

The study, published in the European Journal of Information Systems, found when people were “overloaded” with information, they were more likely to believe and share misinformation, said report co-author Dr Eoin Whelan.

“One of the things we found is that when people get overloaded with too much social media, they are unable to go about verifying whether misinformation is valid or not and they are more likely to believe the misinformation,” he told The Irish Times.

There are hundreds of examples of misinformation, including conspiracy theories about the origins of the virus, claims that constitute a “serious threat” to public health and “extreme examples” which have led to people dying by taking hoax cures.

Share your story: Are you living alone during the Covid-19 crisis?

The study cites one article posted on social media claiming Sweden, which has largely remained open for business during the pandemic, has had low death rates. The article was shared more than 20,000 times on Facebook.

“The truth is that Sweden has a death toll of over 4,000, a much higher figure than the combined toll of Scandinavian neighbours Denmark and Norway, which have implemented stricter lockdown measures and have recorded fewer than 1,000 deaths between them,” said Dr Whelan.

Social media companies already had algorithms to limit and control the amount of information people received, and these could be used to ensure news stories were spread out on users’ feeds during the day.

“That would be a good thing for their business model too,” Dr Whelan said. “Research in the past has shown people overloaded with social media are more likely to stop using it.”

People also had a personal responsibility not to “gorge” on social media and to use it in a “sustainable way”, added Dr Whelan, a senior lecturer at the JE Cairnes School of Business and Economics at NUI Galway.

“Social media can be very useful to help people stay informed and up to date with what is happening, and with people worried about their health and their families, they will look to social media and other sources for information. But we found that can be a double-edged sword.

“All social media platforms are coming under pressure to eliminate misinformation: Facebook has implemented some practices, Google has done the same, Twitter and WhatsApp have tried different steps.