Locked up in lockdown: How prisons are coping with Covid-19 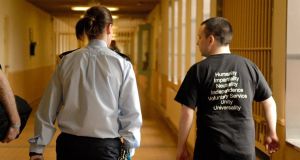 Because the volunteers at Mountjoy are prisoners themselves, they have a much better chance than staff of getting through to the men they are doing time alongside

“Our regime has been changed quite dramatically,” says “Ronny”, one of 677 prisoners in Dublin’s Mountjoy Prison of life in jail during the Covid-19 lockdown.

It is a period of rising tensions with no visits allowed and less time out of the cells.

“Usually we’re out of the cells three times a day: morning, afternoon, tea,” he explains. “But you’re getting out for two hours a day now because the staff have to [accommodate prisoners] from all the landings going to the yard and going to the gym separately.

“All we have in here is routine and structure. But that’s just gone out the window, you know? It’s tough. Boys will be boys and no one admits to being stressed or anxious and all that, but you can get that sense off everyone and it’s understandable. Look, I’m stressed myself.”

He adds: “You have family outside, you’ve kids outside. It’s a worrying time. Your phone calls will never be so important. That’s the hardest part about [the pandemic], is not seeing your family. Everyone has their routine and that’s the best part of your week; that picks you up for the week, seeing your family on the visits, seeing your kids. And then it’s suddenly gone.”

Ronny – which is not the prisoner’s real name – has spent more than a decade in Mountjoy and has a lengthy stretch still to complete.

He has stepped into the frontline to help combat the virus behind the prison walls and is one of 28 Mountjoy inmates working as Irish Red Cross volunteers. They are a vital asset to prison officers and other staff, who face an uphill battle in trying to convince often difficult, violent and mentally impaired prisoners about the merits of hand washing and social distancing.

Because the volunteers are prisoners themselves, they have a much better chance than staff of getting through to the men they are doing time alongside.

With tensions rising due to the restricted regime, the volunteers devised a plan to broadcast Netflix in cells

Back in 2009 the Irish Red Cross began a jail-based scheme in Dublin’s Wheatfield Prison which was the first of its kind in the world. The idea was to train suitable prisoners for six months in skills such as first aid and advocacy. They would graduate with a certificate and become community volunteers and leaders within the prison population. Irish Red Cross prisoner teams now operate in every jail in the Republic.

They have helped staff to develop and then refine a range of programmes – from mental health awareness to drug overdose prevention, mindfulness and even cancer awareness programmes – as well as advising on practical issues such as the least safe locations in jails and where an extra CCTV camera, for example, should be installed.

Prisoner volunteers even give classes on violence prevention programmes to other inmates. It has fallen to the volunteers to convince often difficult prisoners of the merits of cancelling family visits and reducing out-of-cell time – all to minimise the risk of infection.

With tensions rising in the jails due to the restricted regime, the Red Cross prisoner volunteers devised a plan to broadcast Netflix on the televisions in cells.

They canvassed the prisoner population to agree a schedule of preferred programming, with Ozark proving the latest hit in Mountjoy, available to view from 7.30pm to midnight every night. It is a small, temporary, concession extended to prisoners cooped up in cells with no visits.

When the crisis began there were 4,214 prisoners in custody, with a further 363 on temporary release. The prison service sought permission from Minister for Justice Charlie Flanagan to temporarily release an additional 300 inmates. Those selected were nearing the end of – mostly short – sentences for non-violent crimes. Their release created spare capacity in the system, though some have since re-offended and eight early release prisoners are already back inside.

With fewer prisoners in the system it became easier to keep people in cells alone, especially those older inmates who would be cocooning if in the community. Those showing suspected Covid-19 symptoms could also be isolated, and new prisoners could be housed away from the main population for a period until it was clear they did not have the virus.

Temperature checks were introduced for everyone coming into Irish jails and only those vital to the day-to-day running of each jail have been allowed in.

Figures released by the National Public Health Emergency Team (NPHET) showed that by mid-May two people in prison settings had been hospitalised out of 19 cases of Covid-19 in prisons.

Aside from the physical risks from the virus, there are the mental health risks. The psychological service – which deals with a large volume of people at the best of times – has been forced to get creative, as face-to-face meetings and therapy sessions are unable to take place because of social distancing requirements.

Sara Hume, who leads the service across the Irish prison system, says when the pandemic broke “we started with anxiety as the primary presenting issue”.

“As the pandemic has evolved these [anxiety-based] presentations have changed somewhat. It’s a mixture of boredom, frustration, fear, bereavement and a number of other presentations including health anxiety, obsessive-compulsive disorder.”

Hume expects to soon see more cases of depression and PTSD as well as an increase in social anxiety and paranoia. She says many prisoners would feel less safe when restrictions are eased and prisons return to a more normal regime.

The regulation of frustration and anger is a key challenge for male and female prisoners at present, she says, and the primary approach is one of administering “psychological first aid” over the phone to prisoners.

“That’s really just to restore sleep, help people to cope and help people to feel connected with others,” she says, although a more enhanced approach has been required for complex cases.

The psychology service has also produced a series of audio recordings for the Covid-19 period that are available to prisoners via their in-cell TVs. These focus on mindfulness, managing distress and anxiety, muscle relaxation and breathing techniques to control adrenaline.

In a prison, the hardest man who tells you he has never shed a tear is telling you a lie

“In the community people can use a telephone [at any time] to engage with services but we don’t have that luxury in the prison,” Hume says.

“During this time, what we need to be sure of is that we have to keep it at a certain level; we can’t go too deep because we don’t want to bring up trauma.”

Peter Guinan is the chief officer at Mountjoy Prison, managing day-to-day operations in the jail. During his 33 years working in the prison system he has seen it all.

“In a prison, the hardest man who tells you he has never shed a tear is telling you a lie,” he says of the intensity of the experience.

“Everybody gets upset in prisons and it’s very important we get that feedback about what is going on from the prisoner volunteers,” he says, adding that feedback received from Red Cross volunteers never breaches the privacy of others and never relates to specific people.

“The team is invaluable to me; it’s like my right hand.”

Becoming a Red Cross prisoner volunteer can be transformative for the participants, he adds.

“I was sitting beside a lad one day and his dad who had been a prisoner too and I knew him well,” Guinan explains of a recent graduation ceremony for a group of volunteers.