Event will mark election of Sinn Féin lord mayors, MacCurtain and MacSwiney among others 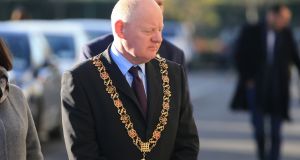 The Lord Mayor of Cork, Cllr John Sheehan has appealed to all descendants of councillors elected to the 1920 Cork Corporation to contact Cork City Council which is planning a special commemorative meeting later this month.

Cllr Sheehan explained that Cork City Council will hold a special meeting on January 30th to mark the centenary of the first corporation with a republican majority after Sinn Féin won 30 of the 56 seats in Cork city in January 1920.

Among those elected to that corporation were Cork’s two martyred Lord Mayors, Tomás MacCurtain, murdered by the RIC in March 1920, and Terence MacSwiney, who died on hunger strike in October 1920.

Cllr Sheehan pointed out that the 1920 council was hugely significant in Cork’s history as, at its first meeting in January 1920, it pledged its allegiance to Dáil Éireann set up just a year earlier after Sinn Féin won the 1919 general election.

“The 1920 Cork Corporation meeting gave a democratic mandate to Tomás MacCurtain and Terence MacSwiney so their deaths, later that year, was a direct blow to the citizens, and not just the activists in the armed struggle.”

Other prominent members of Sinn Féin in Cork such as JJ Walsh and Liam de Roiste, both already members of Dáil Éireann, were also elected as was the only woman to be returned, Anne Sutton of Sinn Féin and the Transport Workers’ Union.

A total of 160 candidates contested the election on January 15th and among the others to be elected were Timothy O’Neill and Gerald Byrne who were returned on tickets standing for ex-soldiers and sailors.

As Lord Mayor, Cllr Sheehan has chaired a cross-party committee of councillors to plan a programme of events to mark the centenary of 1920 and he appealed to any descendants of councillors elected in 1920 to come forward.

“The special meeting on January 20th will raise the curtain on a year of commemorative events in Cork city, marking the fundamental role played by Cork in the struggle for independence,” he said.

“We would like attendance at this month’s special council meeting to be as wide-ranging as possible and therefore we are asking relatives of elected members to contact my office.

The commemorative event will take place at council chamber at Cork City Hall at 6.30pm on January 30th when former lord mayors, TDs, Senators and councillors will read excerpts from the minutes of the January meeting of 100 years ago.