For just 6km, the road from Castleblayney to Dundalk dips into Northern Ireland 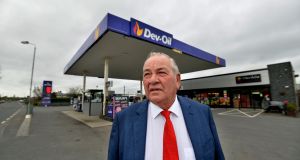 The N53 Castleblayney to Dundalk road slices through the southern tip of Co Armagh.

Travelling from Monaghan, the road enters Northern Ireland where it crosses Ballnacarry Bridge straddling the Fane river. A mere six kilometres later, it leaves the North at the exact spot on the map where the boundaries of Armagh, Monaghan and Louth come together.

For the six kilometres that the N53 is inside Northern Ireland, it is known as Concession Road and is festooned with no fewer than nine fuel outlets, enterprises ranging from substantial filling stations to small fuel depots selling commercial and agricultural diesel. There are other businesses too, including off-licences, car and tractor dealers, furniture and kitchen outlets and firework sellers.

The name Concession Road comes from the fact that for decades – long before the modern Troubles and the Belfast Agreement – there were no customs checks at either end. Southern vehicles could enter and leave Northern Ireland along the N53 without being checked. That was the concession.

Those living within the North, most of them on or around Concession Road and many clustered around the village of Culloville, were not supposed to cross the Border using the N53, though many surely did.

Instead, with their NI vehicle registration plates, they were supposed to use a manned crossing with all the usual customs posts and checks.

One such existed on the R179, the road that runs due south from Culloville to another small Border crossing, Kingham’s Bridge over the Fane, beside derelict 19th-century corn and flax mill buildings, about 400m from the village crossroads. On this road, the full bureaucracy of Border checks and inspections was applied to travellers.

On the northern side, the Border post was blown up by the IRA in November 1971. On the southern side, what locals refer to as Culloville south, there is a ribbon of homes along the road but no commercial outlets. What used to be the Garda station is now a neglected, boarded up, two-storey house.

“This used to be a flax hole,” Martin Watters says of the boggy, flood plain around Kingham’s Bridge and the Fane river valley. The flax was soaked for up to 14 days to separate the fibres that would be milled into linen.

Watters and his brother Séamus run Watters Electrical, a substantial and successful appliance business on Concession Road with customers throughout Ireland.

In the space of just a few minutes’ observation last week, many vehicles flew in both directions across Ballnacarry’s pretty six-arch bridge. Many of the drivers were probably oblivious they were crossing a frontier that is now taxing British and European Union negotiation skills.

There were big articulated lorries, low-loaders with diggers, refrigerated trucks and transit vans, a huge scrap metal truck and numerous saloon and estate cars, with a roughly equal number of northern and southern registration plates.

Noeleen O’Hanlon and her family look out across the bridge, the river and its flood plain from their well-kept bungalow and garden.

“We don’t know what’s going to happen,” she says of Brexit. She’s not overly worried about the possible imposition of a Border and customs post where there never was one but is anxious nonetheless at the uncertainty of it all.

Just around the corner from her and still in the North, is Mary McMahon, a renowned maker of Carrickmacross lace who has lived in the area for all of her long years. “I hope there’s no Border,” she says looking across her front garden and down at the busy road.

Between Ballnacarry and entering Co Louth at the other end of Concession Road, the vehicles pass Hoey’s Fuels, Casey’s Top service station, R & J Fuels, A & N Fuels, CFL Fuels (clean energy, they promise), PLP Fuels (also offering Colombian coal for €14 a bag), Dev-Oil, Blessing’s and O’Neill’s Nisa Local (together with a supermarket in which half the wall space, plus a large part of the floor area is taken up with displays of spirits, wine and beer).

The fuel outlets advertise kerosene (marketed as “kero”), petrol, diesel and red diesel (supposed to be used only in agricultural and construction machinery). Between the fuel outlets are various other enterprises.

They include Ballytrain Plant Sales and yard filled with JCBs; Watters Electrical (which shares a yard with Dynamite Fireworks Superstore that turns out to be a cargo container with a door); the Dev-Oil complex that includes a bar and lounge and off-licence; O’Neill’s Tractors; APS Auto Parts; and Autocare. The general shops in Culloville include a Spar attached to the Top station, another fireworks outlet, Hughes Kitchens, GP Motors and Silkwood Furnishings.

Dev-Oil is run by Eamon Devlin, a warm, irrepressible, larger-than-life character with a past to match.

“I’m a kind of smuggler myself,” he says ushering me into his office having gotten a mug of tea from his filling station-cum-supermarket. A flashing sign advertises litres of spirits for €19.99 and a case of Prosecco for €31.99.

Devlin drives a white Range Rover sports model with personalised plates (E17 DEV). A heavy smoker with a tanned face and on his second liver (“alcohol” he explains), Devlin has diamond rings on both hands, comes from Crossmaglen and is friends with businessman Sean Quinn, as well as IRA veteran and fuel launderer and smuggler Slab Murphy.

There’s a photo in his office showing Devlin and Armagh GAA trainer Joe Kernan flanking Murphy who is holding the International Rules trophy. Devlin has taken part in demonstrations of support for Quinn, describing the Cavan-based businessman, formerly Ireland’s richest man, as his “best mate”.

Other photos in the office show former taoiseach Bertie Ahern and former US president Bill Clinton in Dundalk in 2000; Devlin’s former home in Castleblayney (a 900sq m spread with an indoor swimming pool and a Rolls Royce in the drive), and – pride of place – his lawyer son Eamon, managing partner with MJ Hudson, a London-headquartered advisor firm to fund managers.

“He’s about 150 solicitors working for him,” says Devlin – a nightmare vista for the father surely.

Devlin’s other four sons work closer to home. One runs the farm, another the fuel station, and a third runs a waste recycling business behind it. At one stage in his career, Devlin, who left school aged 14, employed 300 construction workers building schools and factories.

“None [of my sons] went into the building. I was terrible disappointed,” says Devlin.

South Armagh and Concession Road is a place where people are often closely related and the Border, and all that is connected to it, is a backdrop to just about everything.

Devlin’s sister Sue is married to Séamus Watters, and his own wife Kay is a daughter of Jack McCann, killed in the 1972 IRA bombing of the Newry customs clearing centre. The huge Dev-Oil fuel operation, hospitality service and off-licence does “90 per cent of our trade with the Republic”, he says.

“Personally,” he says, “I think it’s going to be a hard border, customs back again and check points and the devil know’s what, which we don’t want.”

But that said, he thinks technology will do away with most of the delays. He says the British didn’t think things through.

Pointing to the hill that separates – by only a few hundred metres – Concession Road from the Border, he says, “EU migrants will come into the South and walk over the back of that and they’ll be in the UK”.

He doesn’t think British prime minister Theresa May is up to the challenge.

“I’d have her 100 times over Margaret Thatcher but it’s a pity David Cameron didn’t stay on,” he says.

Now aged 69 and having survived in business for more than 50 years, using the hated Border to his advantage, Devlin reckons that whatever happens next March when the UK is due to leave the EU, life will carry on much as before.

“It’s not going to hurt us that much,” he predicts.

“The British will negotiate a position and then they’ll spend months and years pulling back from it,” he says. “Nobody knows what to do. I’ll quote Bertie’s [Ahern] mother who said to him ‘don’t trust the British’. We have no reason to think differently at the moment.”

He fears that any restrictions on movement, such as customs posts or other frontier checks, will provoke an inevitable reaction.

“Once you start hemming people in again, they won’t accept it. That’s ordinary decent people. I’m not talking about dissidents.”

A roadside poster from Sinn Féin links the civil rights march of 1968 to contemporary issues. “Don’t let the DUP/Tories take away your rights through Brexit,” it says.

Further down the road outside GP Motors, its owner Patrick O’Meara surveys the collection of small white vans, all bought from English leasing firms after about three years’ use and which he is re-selling. They’ll all go to buyers from the South, he says.

As he chats about Brexit and the uncertainty of it all, an unmarked Mitsubishi jeep glides by, heading towards Ballnacarry Bridge.

“The police,” says O’Meara, “they patrol up and down every now and then.”

Just checking there’s nothing unusual going on along Concession Road.