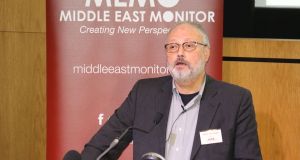 Business group Ibec has cancelled a conference involving the Saudi ambassador to Ireland over the presumed killing of a dissident journalist in the Saudi consulate in Istanbul.

The State’s largest business representative group decided to call off the trade and investment conference to promote Irish business links to Saudi Arabia that was due to be held in the Shelbourne Hotel in Dublin on Thursday.

Saudi journalist Jamal Khashoggi, a critic of the Saudi leadership and a columnist for the Washington Post, was last seen entering the Istanbul diplomatic mission on October 2nd.

Saudi Arabia initially said that he left the building unharmed, but it has since been alleged in Turkey’s pro-government media that Mr Khashoggi was tortured and killed inside the consulate.

A spokeswoman for Ibec confirmed it was going to cancel the event. Saudi ambassador Nail Al Jubeir was listed as one of the named speakers and Ibec chief executive Danny McCoy was also due to speak.

“I would like to advise that Ibec has decided to cancel tomorrow’s joint trade and investment event with the Irish Saudi Arabia Business Council, ” Mr McCoy said in a short follow-up statement.

The National Union of Journalists, which had earlier called for the cancellation of the event, issued a statement welcoming Ibec’s decision.

“This conference has been planned for some time and it is appropriate that in the worsening situation in Saudi Arabia that the govenrment and Irish companies take a new look at plans to strengthen links with the Saudi regime,” said Séamus Dooley, the NUJ’s Irish secretary.

Ibec represents companies employing about 70 per cent of the Irish private sector workforce and is the biggest business lobby group in the country. It has more than 230 staff and 42 trade organisations.

The decision to pull the conference follows the decision of several high profile business people to withdraw from a Saudi conference in response to Mr Khashoggi’s disappearance.

They have withdrawn from the Future Investment Initiative conference in Saudi that the country’s crown prince Mohammed Bin Salman hoped would showcase the country’s economic future.

Those withdrawing from the event, dubbed “Davos in the Desert” by US media, include David Bonderman, co-founder of private equity giant TPG Capital, tycoon Richard Branson, media investor Arianna Huffington and Jamie Dimon, the chief executive of JP Morgan Chase.