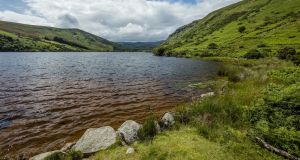 Hillwalkers who use the Wicklow mountains for recreation have expressed renewed disappointment at the latest “anti-walker” signage to appear on the Luggala estate.

The estate, the former home of Guinness heir Garech Browne, is currently for sale, asking €28 million.

Following Mr Browne’s death in March, up to 10 signs appeared proclaiming the estate, which contains many traditional walking routes, was private property.

The estate is controlled by the trustees of Barbican International Corporation, a Guinness family trust. which is based in Guernsey, in the Channel Islands.

However a further sign has appeared at the gate on the mountain road, the R759, which informs the public that a pedestrian gate beside the Luggala driveway, which was traditionally left open to walkers, is to be closed from 5.30pm. The sign states simply: “This gate will be closed from 5.30pm”.

Former Green Party TD and environmental activist Roger Garland has taken exception to the latest signage, saying he believes it could only damage relations between the owners and people in the local and hill walking community.

He said the “anti-walker” sign had serious health and safety implications as the walking route, “as well as accessing Lough Dan, provides access to two mountains, Fancy Mountain and Knocknacloghoge.

“It is not beyond the bounds of possibility that someone could be injured or fall ill and fail to meet the 5.30pm deadline.There is no other convenient exit from the estate,” he said.

Attempts to contact the sales agents were not successful.

Mountaineering Ireland has already appealed to Minister for Culture Josepha Madigan to acquire the uplands surrounding the estate while Minister for Rural and Community Development Michael Ring has appealed to the Guinness family to donate it to the Irish people.

The National Parks and Wildlife Service (NPWS) has recommended that the State buy 4,000 acres of the property because of its “strategic importance” and its tourism potential.

The ashes of Mr Browne, who was also one of the founders of Claddagh Records, were recently scattered at Luggala in the presence of President Michael D Higgins.

The estate is bordered on three sides by the Wicklow national park – which increased in size after Mr Browne sold 1,600 acres to the State in 2006 for €1.7 million.