Four out of five PSNI recruits are from Protestant community

Politicians may have to resume 50:50 Catholic:Protestant recruitment, PSNI head says 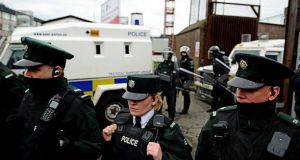 The PSNI has warned the majority of its recruits are coming from the Protestant community. The force on Monday launched a campaign to attract 400 new recruits. Photograph: Getty

Four out of five recruits to the Police Service of Northern Ireland (PSNI) are from the Protestant community compared to just one from the Catholic community, the PSNI has disclosed.

If this trend continues then politicians will have to consider reinstituting the 50:50 Catholic:Protestant system of recruitment, the PSNI deputy chief constable Stephen Martin indicated on Monday.

Mr Martin also said while the same numbers of Catholics have been applying to join the PSNI the calibre of those candidates has not been as high as that of Protestant applicants - hence the reason why four out of five successful applicants in recent recruitment drives have been from a Protestant or unionist background.

Mr Martin made his comments at PSNI headquarters in Knock, east Belfast where he announced a campaign to recruit 400 new officers.

“What we have seen is that the application rate has stayed fairly consistent but regrettably the last few campaigns show us that Catholics have been less successful in getting positions in the police,” said Mr Martin who took over in a temporary capacity as deputy chief constable from Drew Harris, now the Garda commissioner.

“Broadly speaking we can say over the last two or three years for every five officers who have joined four have been Protestant and one has been Catholic,” he said.

“Quite frankly that is not good enough. We are concerned about that,” he added.

Under the 50:50 recruitment system the number of Catholics in the police grew from 8 per cent when the Royal Ulster Constabulary transitioned into the PSNI in 2001 to 32 per cent at present.

When the number of Catholics in the PSNI reached just under 30 per cent in 2011 that system was ended.

In recent recruitment campaigns many more Protestants that Catholics were successful. The recruitment process was “meritorious”, said Mr Martin.

“What we are seeing is that those who are applying are being out-performed in terms of the processes by, I suppose, their competitors from the other community background,” he said.

He added, “It is really important that a police service is reflective of the community it serves. It is important for sustaining public support and confidence and, indeed, actual legitimacy. So, we are under-represented in Catholics. We want to see more apply and we want to do everything we can to see that they are successful.”

Mr Martin said the 50:50 system was very successful. He warned if the Catholic recruitment “success rate was to continue as in the last few campaigns it would be inevitable that in future years we might start to see the Catholic composition of the organisation fall”.

“That would be unacceptable and I think in those circumstances all options would need to be considered,” he said.

Did that include restoring 50:50 recruitment, he was asked. “It is a political decision but I don’t think we should be dismissing any option if we started to see the Catholic composition rate continually stall or indeed fall,” said Mr Martin.

A police spokeswoman said that during the actual recruitment process quite a number of Catholic applicants actually withdrew from that process.

Mr Martin said research showed factors affecting the reduction in Catholic recruitment included the dissident threat and “what that might meant in terms of having to set aside some of their contact with family members, the ability to travel comfortably and easily into all communities, maybe having to stop participating in some cultural activities that they have grown up with”.

Mr Martin urged people and organisations with influence within the Catholic and nationalist community such as the church, political parties, sporting bodies and schools to “advocate for people from the Catholic community to take that step forward and join the police”.