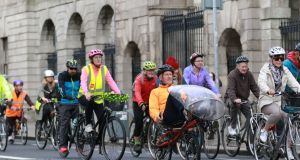 Cyclists will have longer to pass through major traffic junctions in Dublin with the installation of new safety sensors around the city, Minister for Transport Shane Ross has announced.

Cyclists will have longer to pass through major traffic junctions in Dublin with the installation of new safety sensors around the city, Minister for Transport Shane Ross has announced.

The technology, costing around €10,000 a junction, will detect cyclists arriving at traffic lights, then send a message to the junction box which will delay the green light to allow for longer time to pass through.

Traffic lights are usually programmed to allow for cars passing at a much greater speed than cyclists, whose average speed is taken to be around 15 km/hour.

The sensors will mean if there are no cyclists present, the normal sequencing applies, cutting down on unnecessary delays for general traffic, buses and trams.

The technology has already been installed at a cycle lane on the junction between St Stephen’s Green and Leeson Street. Up to 40 junctions are to be fitted with it this year.

“I want to encourage more people to cycle and I realise that safety is a concern to many, so I am continuing to invest in safety measures for cyclists,” said Mr Ross.

“This €400,000 (investment) will improve safety for cyclists at 40 key junctions across Dublin city centre and is a great example of my department and the National Transport Authority working with local authorities to improve cycling and walking infrastructure generally.”

Figures provided by the Department of Transport in May showed Government spending on cycling infrastructure has plummeted over the past three years despite a dramatic rise in the number of people switching to bikes for everyday journeys.

The number of cyclists in Dublin city has more than doubled over the past six years, with more than 95,000 people using bikes in the capital every day.