Blanchardstown in a jam as doughnuts cause ‘Christmas-like’ traffic 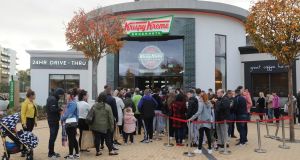 Traffic jams said to be “like Christmas” which affected Blanchardstown in north Dublin on Sunday were said to be caused by queues for a new, drive-through, doughnut store.

AA Roadwatch reported traffic was heavy at the N3 exit from the M50, but was severely congested on the Snugborough Road and the N3 approach to the Blanchardstown Centre, as well as other roads in the centre vicinity.

AA Roadwatch’s Arwen Foley said “it was exceptionally busy around 4pm on Sunday. It seemed to come out of the blue.” Ms Foley said the AA could not say definitively what caused the jam but it appeared to be based around the shopping centre.

Swords-based chauffeur Ross McNally said he was sitting in traffic near the centre for 40 minutes on Sunday afternoon. “It was madness. It was like Christmas,” he said. A woman who lives locally agreed. She said she saw the traffic tailing back from the doughnut drive-through.

A public relations spokeswoman for the new doughnut shop, said she could not confirm the traffic disruption was caused by the new outlet which is a branch of the US Krispy Kreme chain.

She said however the chain was very excited by the reception the new business had received and “more than 300 eager doughnut fans” had queued for the store opening at 7am on Wednesday last.

Pat Fitzgerald, Blanchardstown Centre operations manager, said the traffic was generated by interest in the new shop. He said the level of interest was a “fantastic response” for the new outlet.

Under Dublin’s new BusConnects proposals the Blanchardstown Centre would be a significant point for new services, but concern has been expressed by local politicians about the ability of buses to get in and out of the centre during busy times when queues can be seen extending across a bridge over the N3.