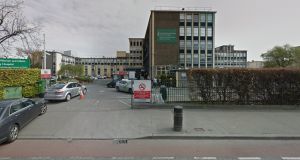 The incident took place in a restricted area of the Coombe hospital which requires a key code to gain access. Photograph: Google Street View

The Coombe maternity hospital in Dublin is reviewing its security procedures after a man gained entry and held a knife to the throat of a midwife.

The incident occurred last Thursday morning when the woman disturbed the man as he was in the process of stealing her handbag from a restricted area of the hospital.

The man fled the scene with the bag after putting the blade to the woman’s throat. Gardaí from Kevin Street Station are investigating. They have reviewed CCTV from the area but no arrests have been made.

They have yet to identify the man but gardaí believe he is probably responsible for several muggings reported in the area in the days preceding the incident.

As the incident took place in a restricted area of the hospital which requires a key code to gain access, management are now conducting a review of its security procedures.

The woman was not injured but was deeply shaken by the incident.

‘’An investigation is ongoing into an incident that occurred in a building adjacent to the hospital on Thursday morning, September 27th,” a spokesman for the Coombe said on Monday. “As the building does not contain inpatient facilities, mothers and babies were not at risk.”