Nearly 8,000 patients were on trolleys in hospitals last month 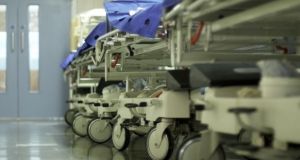 Nearly 8,000 patients had to wait on trolleys and chairs in hospitals last month for admission to a hospital bed, nurses have revealed.

The Irish Nurses and Midwives Organisation (INMO) said a number of hospitals experienced record levels of overcrowding for that time of year.

It said 68 children were among the 7,765 patients overall around the country who were forced to wait on trolleys for admission to a bed in September.

The INMO said at Letterkenny University Hospital there were 502 patients on trolleys last month while there 461 at the Midland Regional Hospital in Tullamore.

INMO general secretary Phil Ni Sheaghdha said: “Nearly 8,000 people on trolleys should be regarded as a national crisis. But it’s become business as usual in the Irish health service. Our members are telling us that they can’t go on with this number of unfilled vacancies. It’s not safe for patients and it’s not safe for staff.”

“The HSE simply cannot hire enough nurses and midwives on these (existing) wages. Unless pay increases, vacancies will remain open, wards will remain understaffed and things will only get worse.”

Following a decision at a special delegate conference last week, the INMO is to ballot its members on new Government’s proposals on pay, and if they think they are sufficient to resolve the recruitment and retention crisis.

The INMO is recommending members vote to reject the proposals.

The INMO had sought across-the-board pay rises for nurses to tackle recruitment and retention difficulties in the health service.

Under Government proposals between 18,000 - 20,000 nurses would receive increased allowances.

The Government has also argued that about 10,000 nurses would benefit for a separate initiative to end the two-tier pay system under which staff across the public service who were taken on after 2011 are paid less than more longer-serving colleagues.

Some nurses could benefit from both sets of Government pay proposals. However others would not gain anything extra at all.