Over 1,500 Irish women have accessed terminations since referendum, Minister says

Full decriminalisation, changing abortion laws in the north and celebrating the repeal referendum win were just some of the reasons 2,000 campaigners marched through Dublin for the 7th Annual March for Choice on Saturday 29th September. 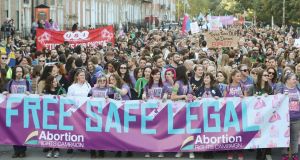 Demonstrators take part in the Abortion Rights Campaign’s annual March for Choice In Dublin, as legislation to liberalise Ireland’s termination laws is set to be introduced into the Dáil next week. Photograph: Niall Carson/PA Wire 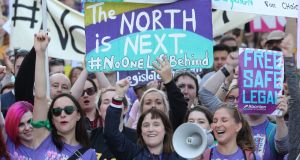 All members of the Oireachas regardless of their personal views should engage constructively with the abortion legislation that is to be introduced this Thursday, the Minister for Health, Simon Harris, has said.

“Women have waited far too long already,” he said to reporters in Dublin at the outset of the seventh annual “march for choice”, which was attended by approximately 2,000 people, the majority of whom were young women.

In the 128 days since the referendum more than 1,500 Irish women have had to travel abroad to get a termination or accessed the abortion pill online, illegally and without medical supervision, Mr Harris said.

He said the people of Ireland had, with the referendum, given a very clear instruction “to get on with it” and that was what he expected would happen when the legislation was introduced next Thursday. The march was about ensuring a “focus” was kept on the issue.

Mr Harris said he expected the new law would be in place by the beginning of next year, but that it was necessary that they got it right.

He said he wanted to work with political colleagues and medical stakeholders and had no doubt that the medical community would “step up” and deal with the matter.

However the Pro-Life Campaign, in a later press release, said Mr Harris was intending to “railroad” his abortion legislation through the Dáil.

“Minister Harris promised during the referendum campaign that there would be ‘ample time’ to debate the provisions of the abortion legislation. Like so many of the other promises Mr Harris has made, he is now reneging on that commitment,” the group said.

Student groups, women and abortion activist groups, and political parties including Sinn Féin, the Green Party, the Labour Party, People Before Profit, and the Social Democrats were among those who carried banners as the march went down O’Connell Street. Many sported badges and t-shirts with the slogan “Free, Safe, Legal”.

At the rear of the march was a group of forty or more Brazilians who live here and were protesting against the Brazilian presidential candidate, Jair Bolsonaro, whom they said was a homophobe and a sexist racist.

Most of the marchers who spoke to The Irish Times said they were there to celebrate the result of the abortion referendum but also to press for change in Northern Ireland and to ensure that the proposed new law in the Republic was passed as soon as was practicable.

Danielle Roberts of the Alliance for Choice in Northern Ireland said it “should be next” for the introduction of a reformed abortion law.

Northern Ireland, which has one of the most restrictive abortion regimes in Europe, provides travel funding for women who are going to the UK to have abortions, with approximately 28 travelling every week.

The numbers travelling to the UK has increased from approximately 10 per week since the means-tested travel support grant was introduced “which illustrates what a class issue this is,” Ms Roberts said.

She said the issue of women travelling to the Republic to access abortion services once the abortion law is passed here, is currently a matter of discussion with politicians

Shampa Lahiri (46), who was wearing a sari and a bindi, said she was at the march “because Savita Halappanavar is not.”

She was there to applaud politicians such as Simon Harris, Stephen Donnelly, and all politicians who campaigned to repeal the 8th amendment, she said.

Tara Lonij (29) said she would be against the imposition of a three-day waiting period before a woman could go ahead with an abortion. She said there was no research that showed that such a measure was necessary. “Is there such a waiting period for any other medical procedure?”

Michi Hyams (31) said she was at the march both to celebrate what had been achieved and to remind the government that people are anxious to see legislation introduced.

She said she did not believe that having an abortion should ever be a criminal offence. “Healthcare should never be criminalised,” she said.