Housing causing distress for ‘over half a million’

Jesuit group critical of Government, calls for support for housing protest on Wednesday 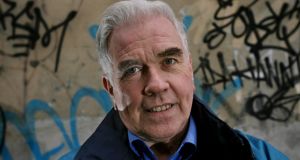 Fr Peter McVerry: There are probably over half a million people in this country whose housing situation is causing them great distress. Photograph: Matt Kavanagh

The Jesuit Centre for Faith and Justice has called for people to come out for the “Raise the Roof” housing protest , at the Dáil on Wednesday.

The “Call for Action by Christians in Response to the Housing Crisis” was published on the website of the Association of Catholic Priests, and signed by the “Jesuit Centre for Faith and Justice”.

The centre is a Catholic forum on social justice,including issues such as penal policy, asylum, international development and homelessness.

The article comes in advance of a pastoral letter on homelessness, to be published by the Catholic bishops on Monday.

Quoting extensively from the words of campaigner for the homeless Fr Peter McVerry, the Centre described the housing crisis as “the biggest social problem that Ireland has faced in a generation.”

It said the “dominant policy response” by successive governments to growing waiting lists has been to subsidise private rents at a cost of almost €2 million per day. “Therefore, it cannot be for lack of money that the problem is not being solved”, the article said.

In a criticism of the Government’s plan Rebuilding Ireland, the Centre for Faith and Justice said “instead of committing to the steps that will ease the pressure ... ... the Government remains wedded to its ideological commitment to a market-driven response.

“Its latest initiative, a new Land Development Agency, promises to give thousands of acres of publicly-owned land to private property developers over a twenty-year period. The numbers of social and affordable houses that will be provided will be minimal. The levels of profit won by those who get the contracts will not be.”

Quoting directly from Fr McVerry the article says; “There are probably over half a million people in this country whose housing situation is causing them great distress. They include people who are homeless, those who are living in overcrowded accommodation, those who are living in unaffordable and often poor quality private rental accommodation, those still living with their parents because they cannot afford to move out, those who are in long-term mortgage arrears and facing the threat of re-possession.”

Peaceful public marches are “the obvious response from citizens who want communities fit for the 21st century, built with children and the environment in mind, meeting the basic needs of every person. Protests are not solutions to the complex problems we face. But they will force resolution from our leaders and those with the power to change things” the article said.