City expansion will be like ‘Brexit’ for Co Cork, says TD 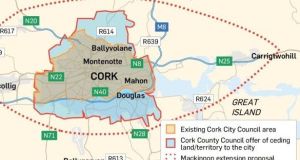 A graphic showing the proposals for the expansion of Cork city. Photograph: Irish Times graphics

The proposed expansion of Cork city could have as devastating effect on rural communities in Co Cork as Brexit could have on the Irish economy, Michael Collins TD has warned.

Mr Collins, a member of the Rural Alliance of Independent TDs, has tabled a motion for debate in the Dáil on what he says will be the detrimental effect that implementing the recommendations made in the Mackinnon report will have on Cork County Council’s ability to fund services in rural communities throughout the county.

The report, prepared by a group reviewing local government in Cork and chaired by former Chief Planner for Scotland, Jim Mackinnon, recommended an expansion of Cork city that would see its size increase seven fold and its population grow from 125,000 to 225,000.

The Mackinnon report recommended an expansion of the city to include suburbs contiguous to the city such as Rochestown, Frankfield, Grange and Ballyvolane as well as surrounding satellite towns and villages such as Ballincollig, Killumney, Blarney, Glanmire, Little Island and Carrigtwohill.

The report, which was welcomed by Cork City Council, has provoked controversy in Cork County Council, with councillors warning that implementing the expansion will result in the county council losing a major section of its revenue earning base around the city.

Cork County Council has traditionally used rates and LPT collected in its South Cork Division, which accounts for 50 per cent of its income, to subsidise services in the more sparsely populated and less economically developed North and West Cork divisions.

Mr Collins, a former member of Cork County Council, told The Irish Times that allowing the expansion to go ahead will “decimate rural communities, especially those along the peninsulas of West Cork as it will deprive them of resources.”

He has tabled the motion for debate in the Dáil on Tuesday night, with a vote due on Thursday. He urged rural TDs from all over Ireland and from all political parties to support his motion opposing the expansion.

“This is all about gathering the support of rural TDs all over the country to back our motion and to put this issue to bed once and for all, because this is our Brexit and people don’t seem to realise it - it has consequences every bit as far reaching for rural Cork as Brexit has for Ireland,” he said.

“We’re talking about the mistake that people in the UK made by voting for Brexit but nobody seems to be worrying about what could happen here with the city extending and eating up the county’s rate base because it will be a disaster for rural communities in Co Cork.”

Mr Collins’s motion could prove challenging for rural Cork Fine Gael and Fianna Fáil TDs, as the Mackinnon report has been backed by the Fine Gael leadership including Minister for Foreign Affairs Simon Coveney, who commissioned it, and Fianna Fáil leader, Micheál Martin, who hailed it as good for all of Cork.

Cork East Fianna Fáil TD Kevin O’Keeffe told the Irish Examiner in September the Mackinnon expansion was “a total land grab”, while Cork North West Fianna Fáil TD Aindrias Moynihan said that the report had gone much further than people expected with the inclusion of Ballincollig and Ovens.

Cork South West Fianna Fáil TD Margaret Murphy O’Mahony told the Irish Examiner in a survey of Cork TDs that the proposed expansion would see the city swallow up revenue rich areas in the county, which would lead to a loss of services in peripheral areas in West Cork.