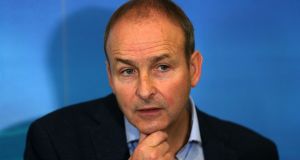 Fianna Fáil leader Micheál Martin also put the Government ‘on notice’ in regard to the delivery of housing and health. Photograph: Laura Hutton/PA Wire

Fianna Fáil leader Micheál Martin has urged the Government to talk directly to the British government about the implications of Brexit.

Speaking on RTÉ’s The Week in Politics, Mr Martin criticised the response by Taoiseach Leo Varadkar and Minister for Foreign Affairs Simon Coveney to the challenges arising from a UK exit from the European Union.

The Fianna Fáil leader said the Government had “put all of their eggs into the Barnier basket” referring to the European Union chief negotiator for Brexit Michel Barnier.

Mr Martin said: “Obviously there is a formal issue about negotiating with the British government but we do need to be influencing British public opinion, it is already shifting.”

The Government this week published an internal report by Revenue assessing the impact of Brexit on Ireland. It began its work in June 2016 and was stopped in September 2016 at the request of the Government.

It carries a stark warning that a hard Border is inevitable and eight checkpoints may be required.

Mr Martin has called for Mr Varadkar to allow the Revenue to complete its work and prepare for every eventuality including the ones the Government does not want.

“I would already be putting together proposals for State aid packages for businesses that need to diversify and develop new markets, loans and aid under the solidarity framework that Brussels has allowed and there is precedent for this.”

The party leader also put the Government “on notice” in regard to the delivery of housing and health.

One of the key elements of the confidence-and-supply agreement between Fine Gael and Fianna Fáil is ensuring there is results in these two areas, Mr Martin added.

He said: “Yes we are becoming impatient about lack of delivery on housing, we lost a year due to the internal angst in Fine Gael around who was to become the leader and in terms of all of the various initiatives they have taken around housing they have failed by their own admission.

“We have had four major strategies, four ministers, 40 major announcements and the problem keeps getting worse.”