Deserted Dublin: ‘It’s like the zombie apocalypse out there’

With all Dublin Bus and Luas services cancelled the streets of Dublin were eerily quiet at rush hour due to hurricane Ophelia. 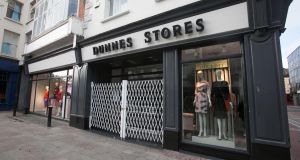 Stores closed on Dublin’s Grafton Street on Monday. The mood of the few people who are about seems to be of befuddlement. Photograph: Gareth Chaney Collins

“It’s like the zombie apocalypse out there,” a customer mutters into his pint in Neary’s on Chatham Street. The pub’s carpet is covered with leaves – every time the door opens a fresh batch blows in and by this stage the bar staff have given up on playing King Canute. There are no more than half a dozen people in Neary’s, but there are even fewer outside on this deeply strange Monday afternoon in Dublin city centre.

Around the corner, Ophelia howls down a virtually deserted Grafton Street. The only times I’ve seen these streets this empty in daylight hours have been on Christmas Day or during a big World Cup match. A few tourists take selfies outside the shuttered stores. In a display of Teutonic indomitability, Hugo Boss is the only clothes shop open for business. The usual flower sellers, buskers and chuggers are nowhere to be seen, apart from one young Brazilian holding a sign for a Thai noodle joint. He explains he’ll be finished his shift in half an hour, so he’s not too worried about his personal safety.

Outside Brown Thomas an Italian family stop suddenly and point in amazement at a perfect rainbow in the clear blue sky above. I’m confused. Rainbows. Bright sunshine. Balmy temperatures. Is this the way hurricanes (or even ex-hurricanes) are supposed to be?

A patrol car cruises slowly up the street, keeping an eye on everything. “I’m new to this hurricane thing. When do we start looting?” wonders someone on Twitter, but there’s no sign of any urban disorder breaking out – in fact, the mood of the few people who are about seems to be of befuddlement.

But then, at St Stephen’s Green, a powerful gust hits. The trees around Fusiliers’ Arch are shaking wildly. The overhead wires screech in protest. People scurry for the shelter of the side streets. Suddenly you become painfully aware that a slate or a branch or a piece of signage could come flying at you from anywhere. This is why you’re not supposed to be outside.

Five minutes’ walk away, Dawson Street and Molesworth Street, usually bustling and traffic-clogged, are entirely empty. There’s little or no sign of any material damage around, apart from a few broken branches and a fallen tree on the east side of the Green. The pavement along the walls of Trinity College is strewn with twigs, which are being picked up and kept, presumably as hurricane souvenirs, by a group of Japanese tourists.

A couple of hours earlier, north of the Liffey, the calm before the storm is living up to its name. All the big stores on Henry Street are shut, except for Tesco in the Jervis Centre, which pulls down its shutters at noon .There’s a bit of a breeze but it’s T-shirts and shorts weather, which adds to the general air of unreality. A gaggle of French tourists pile out of a taxi-van on Mary Street, unload their bags and gape at the shuttered shops, restaurants and bars.

Not far away, on Bow Street, the Capuchin Day Centre is keeping its doors open all day and into the night. The centre, which provides hot food and drink for the homeless, usually opens in the mornings and afternoons. “I hope I can stay here all day today,” says Garret Kenny, who’s been homeless for the last 15 years. “It’s a great facility. You couldn’t get better.” He’s been in and out of hostels over the years but now sleeps rough on O’Connell Street. “It’s very dangerous,” he says. “I haven’t come to harm myself but I’ve seen people coming to harm.”

“What we’re trying to do here is avoid any deaths on the streets,” says the centre’s volunteer co-ordinator Alan Bailey. “The last thing we want is to have someone out in that weather tonight, so to avoid that we decided to remain open through the day. You can see it’s already starting to fill up.” Indeed, a steady flow of people are arriving at the door as we speak. Like everyone else, they seem a little confused about what the day might bring. But at least they know they’ll be safe until the storm passes.