Storm Ophelia: Days of recovery ahead after wave of destruction brings State to standstill 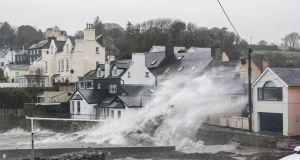 The country is facing days of “catch-up” as schools, hospitals, roads, electricity networks and other key public infrastructure are cleared of debris or repaired following Storm Ophelia.

Three people were killed on Monday in the worst storm to hit Ireland in more than 50 years, which left hundreds of thousands without electricity overnight.

The storm caused the most devastation in the south and west but left every county with some level of disruption.

Ministers and senior officials have warned that it will take days for some public services to get back to full strength. All schools will remain closed on Tuesday to allow for safety inspections to take place, with most expected to reopen on Wednesday.

The Health Service Executive (HSE) says it needs a “period of catch-up”, with some elective surgery appointments cancelled.

ESB networks are working to re-establish supply to more than 300,000 homes and businesses.

Government figures have said an assessment of damage will have to be completed before a calculation of funds needed for a clean-up can be undertaken.

However, some sources suggested the cost would be a few hundred million euro. 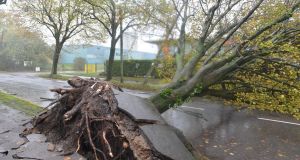 The National Emergency Co-ordination Group (NECG) will meet again on Tuesday morning to oversee what its chairman, Seán Hogan, called the process of getting “the country back to work”.

Derek Hynes of the ESB said there were 5,000 faults in the electrical network, mostly caused by fallen trees. He said it would take a “number of days” for the system to be fully repaired, with assistance coming from Northern Ireland, Scotland and the rest of the United Kingdom.

Priority is being given to those in vulnerable situations, such as nursing homes and hospitals, and a large number of such facilities were already reconnected last night.

Late on Monday night, Northern Ireland Electricity said about 11,000 households were without power across the North, with supply restored to 38,000 people.

Early on Monday morning, Ophelia reached speeds of up to 190km/h and generated 200ft waves before making landfall in Co Cork where the brunt of the storm’s power was felt.

The storm moved rapidly northwards, hitting Clare and breaching flood defences in Galway before turning northeast across the country.

The president Michael D Higgins, who is on a State visit to Canberra, Australia, said he had no doubt that after the storm, “people in Ireland will co-operate with each other in their usual way, and that those who work in public service will produce the extraordinary response for which they have such a great reputation”.

The Dublin area appeared to escape the worst of the storm. Emergency services responded to 150 storm-related incidents, of which about 70 were fallen trees.

Many workers were left stranded in the city in the afternoon when their employers decided to close for the day at the same time that all public transport providers ceased service.

Bus Éireann, Dublin Bus and Iarnród Éireann services will all resume service on Tuesday morning but both lines of the Luas will remain out of action until at least midday after a control room was damaged in the storm.

The vast majority of flights in and out of the country’s airports were also cancelled but schedules are expected to resume as normal on Tuesday.

There were few reports of other serious injuries but some emergency service workers expressed frustration at the casual attitude of a minority people towards the storm.

Several costal rescues took place, including of two wind surfers who got into difficulty off Co Louth. Others were spotted walking along the Salthill promenade in Galway just as the storm was reaching its most powerful point.