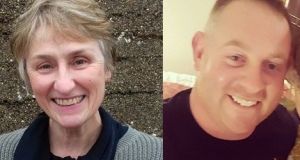 Clare O’Neill died when a tree hit her car in Co Waterford and Michael Pike died while cutting a tree in Co Tipperary during Hurricane Ophelia.

Three people have died in separate incidents as Hurricane Opheila hit the country.

A woman in her 50s was killed when a tree fell on ther car shortly before noon in Co Waterford as Hurricane Ophelia claimed its first life after making landfall this morning.

The woman was driving between Aglish and Clashmore along the R671 at around 11.40am when a tree came in through the windscreen of the vehicle on top of the woman and another woman in her 70s who was travelling in the passenger seat.

The emergency services were alerted and attended to the two casualties but the driver , who is from the local area, was pronounced dead at the scene and the other woman was removed by ambulance to University Hospital Waterford with non-life threatening injuries.

Both women are from the area between Aglish and Clashmore. The deceased was named locally as Claire O’ Neill, a mother of one. The family moved to the area about seven years ago, having originally come from Co Cork. The incident happened less than a kilometre from Ms O’Neill’s home, which is about two kilometres from the village of Aglish.

She worked as an oncology nurse for over three decades, having lately worked as Cancer Support Co-Ordinator with the Cork ARC Cancer Support House with their East Cork and West Waterford service, based in Youghal. She previously worked with the ARC cancer support team at their base on O’Donovan Rossa Road in Cork.

Elsewhere a man in his early 30s died following a fatal incident at Ballybrado, Cahir, Co Tipperary at about 12.30pm today.

While in the course of clearing a fallen tree the man was seriously injured with a chain saw. He has since died and his body has been removed to Clonmel Hospital.

The man was from Ardfinnan and was named locally as electrician Michael Pyke (31) who lived on St Joseph’s Terrace in the village with his father Tony. His mother is deceased.

It’s understood he went to cut up a tree which had fallen on a road about three kilometres from his home, between the village of Ballylooby and Cahir, but was fatally injured by one of the tree’s branches. Gardai are trying to establish why he had decided to cut the tree.

A member of the public came across the scene shortly after the incident happened and notified the emergency services, who encountered some difficulty because of the state of the weather at the time and the dangers posed by other trees in the area.

“It’s a devastating tragedy for the family of this young man,” independent TD Mattie McGrath, who knows the family, said.

The victim’s father Tony is a retired council worker while the victim himself was a single man. “They’re a hard-working family and for his life to be taken like that is just shocking,” Mr McGrath said. “It would bring home to us the dangers of going out into the wind.”

Meanwhile a man was fatally injured in a crash on a local road in Dundalk, Co Louth when his car was struck by a tree. The alarm was raised at about 2.45pm and gardaí and emergency services are currently at the scene on a local road in Ravensdale, Dundalk.

Separately a woman was treated for shock after she had a narrow escape when a tree came down on the bonnet of her car as she was driving between Tower and Blarney in mid-Cork around 10.30am.

The woman was driving along the road when a tree came crashing down just in front of her and while the main trunk of the tree narrowly missed her car, some of the smaller branches landed on the bonnet causing some damage to the vehicle.

“This woman was extremely fortunate – the Blarney Garda patrol car was driving just behind her at the time and had she been a second or two earlier, the main trunk of the tree would have come down on the roof of her car so she was extremely lucky,” said a Garda spokesman.

Cork County Council emergency response crews were working to clear fallen trees on the Fota Road in Co Cork which were obstructing ambulances from getting to Cobh to respond to a number of calls from people living on Great Island.

According to gardaí, several trees were blown down this morning on the Fota Road which is the only road on to the island so council staff began an operation to cut and remove the trees.

And in nearby Midleton, a family had a lucky escape when a tree came down on their house on the Dungourney Road at around 12 noon, damaging both the building and their car but none of the occupants were injured.