Chief scout re-elected amid scrutiny on handling of rape claim 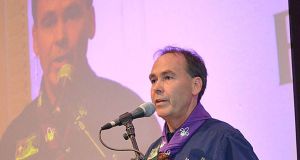 The national council meeting comes as the organisation is under intense scrutiny following revelations of a case review by child safety expert Ian Elliott of Scouting Ireland’s handling of a 2016 allegation by a female scout leader, who claimed she was raped by a male leader seven years earlier.

An internal crisis management group, set up in response to the Elliott report, recommended in March that Mr McCann should step aside, but he did not do so.

Mr Elliott’s report said a meeting Mr McCann held with the scout leader complained of in the rape allegation, while that person was under suspension in January 2017, “demonstrated a blatant disregard” for agreed safeguarding policies.

Despite this, the membership of the organisation backed Mr McCann for a second three-year term. The national council, or AGM, took place at The Helix in Dublin City University on Saturday, and was attended by over 900 members.

Mr McCann was running unopposed, but still needed a majority of voters to support his re-election.

At the council, Scouting Ireland decided to hold an EGM in June to introduce a comprehensive overhaul of the organisation’s governance structure.

Previously it was planned to hold the EGM in October, but the national meeting has been brought forward due to the decision last week by Minister for Children Katherine Zappone to withhold State funding to Scouting Ireland until governance concerns were resolved.

The national council heard the organisation has reserve funding for about three months, after which time it could face financial difficulty if State grants, worth about €1 million a year, remain frozen.

In a statement, Scouting Ireland chief executive Dr John Lawlor said a decision was taken that “the process to enhance governance throughout the organisation will be accelerated”.

On Friday Ms Zappone wrote to Scouting Ireland, seeking to set up a meeting. Dr Lawlor said he would be writing to Ms Zappone on Monday regarding the meeting.

“Our objective is best practice in safeguarding, and the highest standards of governance, and in respect of both to satisfy our members, our Minister and the public,” Dr Lawlor said.

The plan to reform Scouting Ireland’s governance structures has been in motion for the last three years. The proposals will include changes to how their board of directors is made up.

Dermot Lacey, Labour Party councillor and Scouting Ireland volunteer, attended the council as a delegate. Cllr Lacey said the decision to bring forward the governance reforms to June was “reasonable”, and he hoped Ms Zappone would respond “positively” to the move.

Climate change: 9 ways Ireland can get its act together 20:20
Investigation into €10,000 spent on fillet steaks, rib roasts, legs of lamb and luxury chocolates for prisoners 20:12
Leaving Cert: Up to 1000 extra college places may be needed due to results error, Harris says 20:08
Taoiseach tells TD to ‘cop on’ over criticism of contact tracers asking about pubs 19:37
Loyalists call for ‘hard political decisions’ to remove paramilitarism from society 19:36