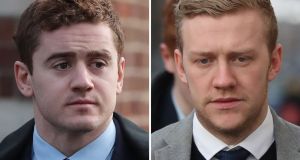 Bank of Ireland has said it welcomes the in-depth review of structures and education programmes announced by the IRFU and Ulster. Photograph: Niall Carson/PA Wire

Bank of Ireland has said it welcomes the in-depth review of structures and education programmes announced by the IRFU and Ulster at the conclusion of its review into the futures of Paddy Jackson and Stuart Olding.

On Saturday Ulster and the IRFU released a statement saying the players contracts had been revoked with immediate effect.

A third player Craig Gilroy, who was not involved in the trial, was suspended for two weeks for sending one of the offensive messages that was outlined to the court.

Ahead of the review’s conclusion Bank of Ireland, a sponsor of Ulster for more than 20 years, had said it was “highly concerned regarding the serious behaviour and conduct issues which emerged as a result of the recent high profile trial”.

They were among a number of sponsors to raise concerns with Ulster and the IRFU.

On March 28th Olding and Jackson were cleared of raping the same woman in 2016, and two of their friends were also acquitted on related charges.

However, some details of the trial, including degrading and offensive Whatsapp messages exchanged between the players and their friends, including Mr Gilroy, were areas of concerns for a range of sponsors of the sides, women’s rights activists and many in wider society.

On Saturday Bank of Ireland said: “We note the statement from Ulster Rugby and the IRFU.

“We welcome the in-depth review of structures and education programmes which has been announced today, and look forward to the recommendations which arise being put into effect.”

SONI (System Operator for Northern Ireland) head of communications Natasha Sayee said: “SONI has been made aware of the results of the IRFU and Ulster Rugby internal review.

“We are carefully considering the outcome to ensure it addresses our concerns as current sponsors of the Ulster Rugby Premiership and our desire to support the values of respect, integrity and inclusivity at community and grassroots level.”

The Belfast Feminist Network organised a ‘Stamp Out Misogyny at Ulster Rugby’ demonstration outside Kingspan Stadium on Friday evening, to highlight their concerns to officials conducting the now concluded review.

The purpose of the activism was also to achieve a number of key demands from wider society.

These include reform of the criminal-justice system and media reporting of rape trials, resources for support services for victims and survivors and for fact-based schools education programmes on consent for all pupils.

Women’s Aid NI chief executive Jan Melia has said the IRFU and Ulster review outcome is positive and that it’s staff are arranging to meet with rugby officials in the weeks to come.

“It’s a positive thing they have done but it’s only the beginning.”

Ms Melia believes “this is our Me Too moment”.

“The whole trial showed there are systemic flaws in the criminal justice system and the media and also that no one seems to know what consent is and the legal definition of consent.”

She added: “Education is going to vital.

“The idea that for boys sex can be about overcoming and achievement and for girls intimacy, we need to start talking about those things.

“We need to talk about that and this is a very positive move on the part of Ulster Rugby.”

Women’s Aid has received calls from people “triggered by the trial” who want to talk about their experience, while others have been in touch to say they are withdrawing rape complaints.

In the aftermath of the trial, Women’s Aid NI, Nexus NI and the Men’s Advisory Project announced it is using some of its already stretched funding to establish a new Rape Crisis Service for Northern Ireland but Ms Melia believes it is “time for government to step up too”.

“It is down to us all now to make a change,” she said.

“We all know about austerity but there must be smarter ways of doing things.

“Nexus has 800 victims in the queue and we were turning away 247 women last year, so something has to be done.”

Women’s Aid sometimes attracts corporate sponsorship but could do with more.

It recently received funding and support from the Bank of Ireland and All State for a conference on the impact of domestic violence on children.

“They were excellent partners,” she said.

“We are asking Stormont policy decision makers about funding and we would invite any business sponsors interested in supporting our work to get in touch.”

Nexus NI chief executive Cara Cash-Marley said: “Nexus as a specialist agency providing support to those affected by sexual violence are ready to work with any agency who wants to know more about the impact of sexual violence, and invest in education or staff training.

“We are also ready to work with those in IRFU and Ulster Rugby to support them in the review of their educational and professional offer.

“We already have a suite of education and professional training programmes and are certainly open to conversations with colleagues in rugby.”