‘When I talk to the Taoiseach about class, he thinks communism’ 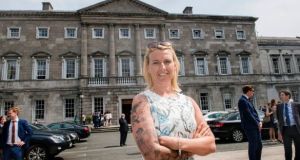 Senator Lynn Ruane told the Sheehy Skeffington School there was a pressing need to directly hear the voices of the marginalised and the poor rather than those advocating for them. File photograph: Brenda Fitzsimons

Irish people are told we live in a “Republic of opportunity” but many people, particularly women living in poverty, cannot access that, Independent Senator Lynn Ruane has told a human rights school in Dublin.

Society must move away from blaming individuals living in poverty for their circumstances and the “choices” they make when the reality is those circumstances were not chosen, their choices are often not real and they are essentially coerced into poverty, Ms Ruane said.

From a distance, choices may look simple but they are not, she said. There are many factors affecting them of which poverty, not just financial but also educational and cultural, is the “most coercive”.

Society heralds the person when they achieve, blames them when they fail and ignores the societal factors, she said. She herself had been often held up as one who has achieved and the message was that those in poor conditions can do the same, but what was not said is that can only happen with the necessary societal supports and structures.

- @SenLynnRuane “If we can understand the social context of the situations of students in schools we can improve our education systems, we need address early intervention & begin looking at the education of families, communities” pic.twitter.com/FjXIVx7FGQ

Micheline Sheehy Skeffington tells 2018 Sheehy Skeffington School that President Michael D. Higgins is to unveil a plaque in June marking her grandmother Hanna's smashing of windows at Dublin Castle in 1918 as part of the suffragette campaign.#sheehyskeffingtonschool

Many women don’t even realise they have rights, they are left in vulnerable situations, they do not get into the spaces to recognise or advance them or to shape the stories, including about the nation, she said. There was a pressing need to directly hear the voices of the marginalised and the poor rather than those advocating for them.

Many politicians, she added, deny the class element of politics. When she speaks in the Oireachtas “looking at the position of women from backgrounds like mine”, “when I talk to the Taoiseach about class, he thinks about communism”.

She made the observations in an address on the theme of “Limited Liberty” to the 2018 Sheehy Skeffington School on Saturday. The annual human rights and social justice school this year marked the centenary of Irish women achieving suffrage, the 50th anniversary of the US and Northern Ireland civil rights movement, on the theme of ‘Rights, Representation and Reality’.

The NI civil rights movement was not a “narrow nationalist project”, although there was no doubt the nationalist community was oppressed and discriminated against in the NI state, he said. It had broader aims and was international in outlook and character although it was “not much more advanced on gender issues than the rest of society at the time”.