Much of church teaching on sexuality and reproduction ‘irrelevant’

Event tackles concerns over World Meeting of Families in Ireland, which pope is to attend 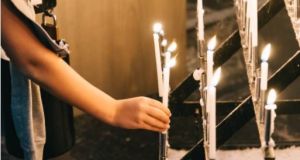 “Young people these days...tend not to follow rules that they don’t see as valid or sensible. For the current youth generation, much of the church’s teaching in areas related to sexuality and reproduction is irrelevant and barely rouses their curiosity.” File photograph: Getty Images

Church teaching on sexuality and reproduction is “irrelevant and barely rouses” the curiosity of young people today, a conference ahead of the World Meeting of Families has heard.

Denis O’Brien, vice-president of the National Youth Council of Ireland, said Church leaders should learn how to communicate with younger generations which it risks pushing away by imposing views and rules they do not follow.

He was speaking at an event held by the Association of Catholics in Ireland (ACI) which is concerned about the tone of the forthcoming World Meeting of Families in Ireland, due to be attended by Pope Francis.

The ACI works within the Irish Catholic Church promoting a reform agenda. Mr O’Brien was one of six Catholic speakers giving voice to segments of society who do not fall strictly in line with conservative Catholic teaching.

The outcome of the conference will lead to the compilation of a report that will be sent to Pope Francis ahead of the WMF in August, it said.

“Young people these days...tend not to follow rules that they don’t see as valid or sensible,” Mr O’Brien said. “For the current youth generation, much of the church’s teaching in areas related to sexuality and reproduction is irrelevant and barely rouses their curiosity.

“Depending on your perspective it could be said that this generation, and perhaps the current generation of young parents, has either escaped the control of the church in this area or has been lost to it.”

He warned that many may not even hear the church’s view on the upcoming referendum on the Eighth Amendment, and that they would not be inclined to listen to those they feel are judging them.

“We should not be afraid of young people’s voices,” he said.

“Shutting down discussion, seeking to promote rules that do not seem to make sense and focusing on whether or not something is sinful will drive young people away.”

Mr O’Brien said children now speak a different language, and the Church needs to learn how to speak it.

ACI chairman Anthony Neville said they wanted to see a “united church”, one that “accepts the equality of all believers by virtue of their baptism”.

“We are conscious of the possibility that at the World Meeting the bishops will present the ‘perfect’ Catholic family: mother, father, two children attending Mass every week, and everything in the garden is rosy,” he said.

Irene Graham, a divorced mother of five, said she had raised her children within the faith. However, with a gay son, she asked what people were afraid of regarding homosexuality.

On the forthcoming event, Ms Graham said: “We want to know when are we going to normalise sexuality – when no one would be looking [at a person] and saying, oh he is gay, or she is gay?

“When will the church say that our sexuality is part of who we are?”

Susan Casey, a divorced mother of two from the US, described how she had sought to re-enter the Catholic Church years after her family had left.

Noticing “a lot of judgment about someone who was divorced”, she said she felt a church “haemorrhaging” members should be more welcoming.