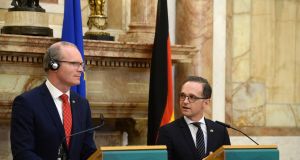 One of the leaders of the far-right Alternative fur Deutschland (AfD), the controversial opposition party in Germany, has said its policies would help avoid a hard border in Ireland after Brexit.

Alice Weidel, the AfD’s parliamentary leader in the Bundestag, said the treatment of counties leaving the EU should be changed.

Ms Weidel made her comments during a visit to Dublin on Thursday. She was part of a parliamentary delegation that accompanied German foreign minister Heiko Mass, who met with Tánaiste Simon Coveney.

Mr Coveney and Mr Mass discussed the Brexit negotiations, with Mr Mass saying that Germany wants to avoid even “a glimmer” of a hard border emerging in Ireland. “The division of this country is something that somebody who comes from Germany is quite aware of.”

Speaking to The Irish Times, Ms Weidel said her party would like any country leaving the EU to automatically remain in a free trade area with other European countries – which would remove the need for a border in Ireland – while remaining outside the EU’s political structures.

Although she said such changes could solve the border issue, this could not be done “overnight”.

“Well, the thing is how the entire mechanism and instruments are implemented during the course of the Brexit negotiations. We think how it is dealt with right now by the European Union is quite harmful.

“We need to get an institutional framework that every exit country needs to fall automatically into a free trade union. That is the reason why my party doesn’t understand the entire turmoil.

Ms Weidel also said a so-called “soft Brexit” would be best for Germany and Ireland. “Great Britain is Germany’s second most important export partner. And for Ireland, like a hard Brexit would be incredibly harmful. I hope that we find opportunities for a soft landing and, on a strategic long-term level, that we reform.”