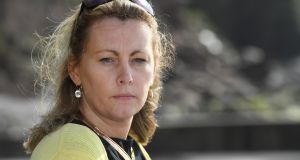 Emma Mhic Mhathúna, who was given an incorrect smear test result and who now has terminal cancer. “The Government need to go,” she said. “They’re not actually capable of minding us, and that is their job.” Photograph: Domnick Walsh

Emma Mhic Mhatúna (37), a mother of five, and said she felt joy at the news.

“The sense of joy is incalculable. It just shows the people of Ireland are amazing when we stand together and there’s only so much we can take.”

Ms Mhic Mhathúna is one of scores of Irish women who were wrongly told they had normal smear tests through the CervicalCheck screening programme, prompting the Government to set up a scoping inquiry into the scandal.

Limerick woman Vicky Phelan, whose High Court case brought the scandal to light, told the Tonight Show on TV3 that while the resignation came later than it should have, she welcomed it.

“A win is a win as far as I’m concerned. It’s a small victory for women. I think it’s the beginning of a cultural shift . . . I think there will be more people losing their jobs as a result”.

In a statement released on Thursday night, Mr O’Brien confirmed his intention was to step down from the position he has held since July 2012 with effect from close of business tomorrow.

Ms Mhic Mhathúna said: “It’s long overdue and it’s a disgrace in the end that it took me to the point here I had to break down for that to happen.”

She called for more accountability in the health service and said inquiries are not enough.

“I can’t believe in Ireland that we have tests for something so important as cancer that are not working properly,” she said.

“If you have people are accountable then people know what happens when you make a mistake, there needs to be consequences. Setting up inquiries and giving redress is not enough; we need accountability.”

Mr O’Brien stepped down as it became clear the Government would not continue to support him and it appeared likely the Dáil would next week pass an unprecedented motion of no confidence in him.

Mr O’Brien’s position became increasingly tenuous after the dramatic release to the Dáil Public Accounts Committee of three memos he had received in 2016 on the background to the issue of cervical screening audit findings which in many cases were not passed on to the women concerned.

One of the memos released revealed that the HSE was concerned about a risk that communicating individual audit findings to doctors could result in patients going to the media with stories that the cervical screening process did not diagnose their cancer.

Drawn up in March 2016, it said the HSE planned to “pause all letters” regarding the audit findings, await advice of solicitors and continue to prepare a reactive communications response for a possible media headline that said “screening did not diagnose my cancer”.

The Department of Health last night confirmed that the memos on the screening audits had been sent by the HSE to some of its officials in 2016.

However it said these documents “were not shared outside chief medical officer and acute hospitals divisions and were not brought to the attention of any minister for health”.

Prior to the announcement of Mr O’Brien’s departure as HSE chief, Minister for Children Katherine Zappone publicly called for him to stand aside.

“I fully support the women and families at the heart of this crisis and I have no confidence in the present director general of the HSE,” he said.

The political storm over the release of the HSE memos forced the Cabinet to relocate its meeting from Monaghan to Dublin on Friday to address the ongoing issues in the cervical cancer controversy. The controversy began more than two weeks ago after Limerick woman Vicky Phelan settled her action against a US laboratory that gave her an incorrect smear test result in 2011.

Ms Phelan was diagnosed with cancer three years later, and a 2014 audit showing her original smear test to be inaccurate – but she was not told until September 2017. It subsequently emerged that an audit of smear tests showed that 209 women across the State could have received an earlier intervention and 162 of them were not told the outcome of the audit. Of the 209 women, 17 are dead.

Earlier on Thursday Ms Mhic Mhatúna said: “The Government need to go . . . they’re not actually capable of minding us, and that is their job.” She added: “I think the only person that can do something on it now is the President.”

Speaking later in Italy, President Michael D Higgins said: “It’s just a tragic, tragic, awful reality that she’s facing . . . and of course there are others, too, who are carrying the burden of an auditing system that has failed our citizens.” He will meet Ms Mhic Mhatúna soon.

Meanwhile, Minister for Health Simon Harris is expected to bring proposals to Cabinet on Friday to put in place a package of measures for the 209 women CervicalCheck determined should have received earlier intervention in their cancer diagnosis. Provision will also be made for the next of kin of the 17 of these women who have died.

Under the proposals the women concerned would receive medical cards, and support for the provision of counselling and transport to medical appointments.

In a statement last night, Mr Harris thanked Mr O’Brien “for his many years of service and dedication”.

“I know that he is standing down from his role today because he believes it is in the best interest of rebuilding public confidence in the wake of the issues which have arisen in CervicalCheck,” said the Minister.

Government sources said the terms of Mr O’Brien’s contract – which runs to the end of July – would be honoured.