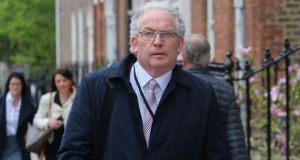 The director general of the Health Service Executive (HSE) Tony O’Brien is resigning as the cervical cancer scandal continues.

In a statement released tonight, Mr O’Brien confirmed his intention was to step down from the position he has held since July 2012 with effect from close of business tomorrow.

“Mr. O’Brien said that he has made his decision in order to avoid any further impact to the delivery of health and social care services, and in particular the cancer screening services that have become the focus of intense political debate in recent days,” the statement said.

Informed sources said Government had made it clear to Mr O’Brien it could not continue to support him. However, the terms of his contract - which runs until the end of July - would be honoured.

It emerged earlier today that the HSE was advised by the National Screening Service (NSS) in March 2016 that there was a risk patients may start contacting media outlets to say screening did not diagnose their cancer.

A memo sent to the Public Accounts Committee shows the HSE was informed by the NSS it was approaching the stage of communicating individual case reports arising from a clinical audit it conducted in 2014 of over 1,200 cases involving cervical cancer screening.

The memo was read by Mr O’Brien, he confirmed earlier today.

Tonight, the HSE statement announcing Mr O’Brien’s imminent departure stated: “He said, notwithstanding the clear communication failures surrounding the CervicalCheck Audits, he is confident that the Scally Review will demonstrate the quality and value of the CervicalCheck Programme once it is complete.”

Dr Gabriel Scally, a veteran of the Northern Irish and English public health systems, was this week appointed as chairman of an initial scoping inquiry.

The HSE statement said Mr O’Brien looked forward to engaging with the review and that he will co-operate fully with Prof Scally and his team.

“Mr O’Brien said he has been proud to lead the health services and the many staff who have worked tirelessly and with great dedication to provide health and social care services in a very challenging environment,” the statement continued.

“He emphasised that he remains deeply committed to health reform in Ireland and in particular the full implementation of the Slainte Care Report. He emphasised his fullest support for Minister [for Health Simon] Harris in this regard.”

Meanwhile, Mr Harris’ office also released a statement confirming the Minister met Mr O’Brien this evening, “who informed him of his decision to step down”.

Mr Harris thanked Mr O’Brien “for his many years of service and dedication”.

He continued: “I would like to express my thanks to Tony O’Brien for his many years of dedicated public service.

“I know that he is standing down from his role today because he believes it is in the best interest of rebuilding public confidence in the wake of the issues which have arisen in CervicalCheck.

“Tomorrow the Cabinet meeting will again discuss this matter and the further measures which can be put in place to care for and support the women and families affected.”

Earlier, pressure on Mr O’Brien intensified after Fianna Fáil confirmed it would support a motion of no confidence in him.

The motion was tabled by Sinn Féin and was due to be taken in the Dáil next Tuesday.

Fianna Fáil’s health spokesman Stephen Donnelly said: “We’ve recently had sight of next week’s motion, calling on Minister Harris to remove the HSE Director General. Fianna Fáil will support this motion, and reiterate that we call on the DG to step down immediately.”

Minister for Children Katherine Zappone called on Mr O’Brien to stand aside after a “game-changer” day of revelations.

Independent Alliance Minister of State for Disability Issues Finian McGrath then re-iterated his call for Mr O’Brien to stand aside.

“I will again be expressing my view at Cabinet tomorrow morning that Tony O’Brien should step aside. I believe in accountability and I am appalled at the revelations today,” he said earlier.

“I fully support the women and families at the heart of this crisis and I have no confidence in the present Director General of the HSE.”

The Fine Gael Minister for Rural Affairs Michael Ring, Mr McGrath and Ms Zappone had previously expressed the view that Mr O’Brien should step down at Tuesday’s Cabinet meeting.

An Independent Alliance source said the situation had become a “lot worse than expected” since Tuesday and said it would call for “accountability”.

In an indication of the seriousness of the ongoing scandal as the day went on, the Cabinet meeting scheduled for Monaghan tomorrow was hastily relocated to Dublin to allow for further centralised discussion about the CervicalCheck controversy.

A spokesman for the Taoiseach said earlier: “The Taoiseach and Minister for Health have been dealing with the cervical cancer matter throughout Thursday and will continue doing so on Friday. The Cabinet meeting is therefore taking place in Dublin in order to continue this work.”

The cervical cancer smear scandal emerged after the case of Vicky Phelan, who secured a €2.5 million High Court settlement against US-based Clinical Pathology Laboratories, which missed her cervical cancer with a 2011 smear test carried out by CervicalCheck.

Ms Phelan was diagnosed with cancer three years later, and a 2014 audit showing her original smear test to be inaccurate was withheld from her by CervicalCheck until September 2017. It subsequently emerged that 209 women had smear tests reviewed but were not informed of the outcome.

The memo, published on Thursday afternoon, said NSS would be making the results known to the clinicians looking after individual women diagnosed with cervical cancer.

“There is always the risk that in communicating individual case reports to clinicians of an individual patient reacting by contacting the media if they feel that ‘screening did not diagnose my cancer’.

The memo was prepared by Simon Murtagh, the then acting head of the National Screening Service.

It points to the “specific issue” that there is now a batch/accumulation of clinical audit case reports that have been completed.

“The volume element of letters increases the risk of an individual reacting to the content if/when shared by their attending clinician. It is far from certain that this would happen.

“All international screening programmes will have encountered a media headline that ‘screening did not diagnose my cancer’.”

Its next steps were to pause all letters, await advice of solicitors, decide on the order and volume of dispatch to mitigate any potential risks and continue to prepare reactive communications response for a media headline that ‘screening did not diagnose my cancer’.

A further memo was sent to the HSE in July 2016 but it does not include a briefing note containing such references to media management or the current status of communicating with the women. This memo, from July, was shared with the Department of Health.

It is understood Mr Harris was not aware of that memo.

It is not known if the previous memo from March 2016 was shared with the Department of Health. Taoiseach Leo Varadkar was minister for health at that time.