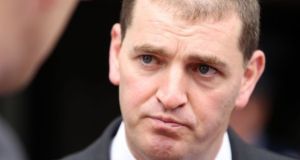 Minister of State for Defence Paul Kehoe said People Before Profit TD Gino Kenny “would say I had blood on my hands” if personnel went on missions with inferior equipment. Photograph: Alan Betson

Minister of State for Defence Paul Kehoe has rejected accusations that he has “blood on his hands” over the purchase of drones from an Israeli manufacturer, amid claims the machinery was tested in Palestinian areas.

Mr Kehoe said his main priority was to purchase the best equipment for Defence Force personnel, adding that People Before Profit TD Gino Kenny “would say I had blood on my hands” if personnel went on missions with equipment that was not the very best.

Between 2007 and 2009, the State bought four drones or unmanned aerial vehicles (UAVs) from Aeronautics Defence Systems Ltd., based in Israel, at a cost of €2.375 million, excluding VAT.

In 2016, the manufacturer upgraded the systems for €1.9 million before VAT and the Minister said the drones were “an information-gathering asset with no offensive capability”.

He said that tender competitions were open to any company or country in accordance with the terms of all United Nations (UN), Organization for Security and Co-operation in Europe (OSCE) and European Union (EU) arms embargoes or restrictions and “no such restrictions or embargoes are in place on Israeli companies”.

Barring Israeli companies from the tender process would have serious implications for Irish foreign policy ,“which are outside my remit”, Mr Kehoe added.

However, Mr Kenny said it was “abhorrent that this State buys any sort of military equipment from Israel”, when it was a “state that has killed 50 unarmed protesters, including journalists and children on the Israeli-Gaza border over the past eight weeks”.

During defence question time he said that the Aeronautics Defence Systems website states that it “sells battle-trained and battle-hardened drones which have been trained in Iraq and Afghanistan. I am sure the drones have also been used in the occupied territories of Palestine”.

Mr Kenny told Mr Kehoe: “There is blood on your hands.” He also said the drones were “not benign”, but rather were meant to carry out surveillance and destroy.

He added that Israel was using drones to drop gas canisters on protesters, leaving people with respiratory problems, inflammation and bleeding.

Mr Kenny said the Department of Defence last year defended the cost of drones. “What about the cost of Palestinians?” he asked.

Rejecting Mr Kenny’s claims, Mr Kehoe re-iterated that his main focus was ensuring the “best equipment available for our personnel while still operating within the processes and parameters which have been set out”.

Sinn Féin defence spokesman Aengus Ó Snodaigh said that “even in military purchasing there has to be some type of ethics and morals”.

Mr Ó Snodaigh added that the “weapons system, which is what UAVs are used for by the Israeli army, is live tested on civilians in Palestine. We have seen the horrific consequences of that in recent times”.

He asked if Mr Kehoe had ever considered a need to have an ethical and moral position with military purchasing rather than just the best price possible.

Mr Kehoe pointed to EU tendering and said the Department of Defence had not set the guidelines. “We must go through EU procurement guidelines when more than a specific amount of money is being spent.”