Call for Magdalene laundry sites to be searched for graves

Sites should not be redeveloped without search for children’s graves, says survivor 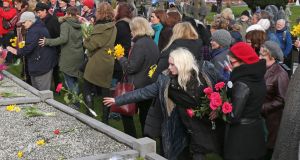 Flowers are laid on graves in Bohermore cemetery in Galway of women who worked in the city’s Magdalene laundry, in the Flowers for Magdalenes commemoration on Sunday. Photograph: Joe O’Shaughnessy 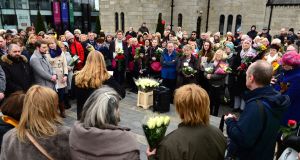 Flowers are laid on graves in Bohermore cemetery in Galway of women who worked in the city’s Magdalene laundry, in the Flowers for Magdalenes commemoration on Sunday. Photograph: Joe O’Shaughnessy

The sites of two former Magdalene laundries in Dublin should not be redeveloped until it is confirmed there are no children’s graves there, a survivor has demanded.

Her call echoed those of the Justice for Magdalenes Research organisation, the co-founder of which, Claire McGettrick, said the organisation had compiled a list of 180 institutions, agencies and individuals involved with unmarried mothers and their children.

Around the North Circular Road and places in Clontarf “there would have been houses dotted around those areas” involved, she said but the commission of inquiry into mother-and-baby homes was looking at 18. She said they had the names of 1,600 people who died in the laundries.

“In terms of the identification of remains, a sample isn’t going to cut it. They’re all real people who deserve to be identified and have their final resting place marked,” she said.

Sinn Féin deputy leader Mary Lou McDonald said at the commemoration that there had to be a criminal investigation into what happened at Tuam. The commission’s remit should be expanded and she said it should be the case that “those who were injured and wronged, will be acknowledged, will receive a full apology, will be compensated where that is possible” and will receive full legal protection and representation.

Ms Merritt said she was in an industrial school from the age of two until 17 when she was sent to the Magdalene laundry.

“I feel so sad for the Tuam children,” she said of the revelation this week of the mass grave in Co Galway. “I’m now 86 years of age and I could have been one of those children in those graves today.”

Ms Merritt said she prayed that when they “take down Seán MacDermott Street and Donnybrook that they make sure there’s not a body under them stones before they move one of them”.

Gabrielle North, who spent 2½ years in a Magdalene laundry in Limerick, recited a poem she had composed entitled Behind the Convent Walls: “Many died still unaccounted for, so they lie in unmarked graves. There are many unanswered questions, yet we all know who is responsible – the church and the State.”

Those attending the commemoration laid flowers at a monument and three graves. The monument erected by a religious order commemorated the women of the “female penitent asylum”. The names of 51 women were on the headstone of one grave, but none of the women was buried there. Their remains were in another grave but their names were not on the headstone.