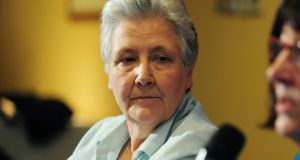 Marie Collins from One in Four: It is doubtful she will be moved by the new “understanding” currently wafting from some in the Vatican. Photograph: Aidan Crawley

It has been said of some senior civil servants, in Ireland as elsewhere, that they believe governments are elected to carry out their will. Such Sir Humphrey-like attitudes are not confined to civil societies.

They also exist at the Vatican where, inevitably, similar senior bureaucrats go one better. They believe the pope has been chosen by God to carry out their will.

Should a pope resist, though they prefer to think him misled, they will show him the way. He may propose, but they dispose. Or nothing happens.

And trying to get them to admit any of this would be every bit as futile as expecting the Sisters of Bons Secours to comment on confirmation that the remains of many hundreds of infants are to be found in Tuam at the Mother and Baby Home they once managed there.

A perfect example of Rome’s bureaucrats at work is how the Vatican’s commission for the protection of minors has been treated by some in the Curia, particularly at the Congregation for the Doctrine of the Faith (CDF).

They could give Sir Humphrey of Yes Minister, or even Terry Prone, who handles press for the Sisters of Bon Secours, lessons in obfuscation and the glorious art of invisible preventing.

The Pontifical Commission for the Protection of Minors (to give it its full name) was created by Pope Francis in March 2014. Its task, he said, was “to propose to me the most opportune initiatives for protecting minors and vulnerable adults, in order that we may do everything possible to ensure that crimes such as those which have occurred are no longer repeated in the church”.

The very first proposal from the very first meeting of the commission ran into a brick wall at the CDF. It was that all new bishops should take part in a training programme on child protection. Pope Francis thought it such a good idea he said it should be extended to members of the Roman Curia.

It met with fierce resistance. Members of the commission were made to feel they were interfering; they were merely an advisory body anyhow. But they hung tough and such training has happened, though not it does not include members of the Curia. It was something of a pyrrhic victory.

Next the commission proposed that a tribunal be set up in the Vatican to hold bishops to account for mishandling clerical child sex abuse cases. In June 2015, Pope Francis announced the creation of such a tribunal at the CDF to deal with errant bishops. At the CDF they discovered legal difficulties. Under canon law, of course. Bye, bye tribunal.

Pope Francis tried again. Last June he published the apostolic letter A Loving Mother, which provided for the removal from office of bishops or other church leaders negligent in addressing child protection.

Relevant structures were to have been in place last September but no one has heard anything since. A panel of jurists from the various Vatican Congregations was to be appointed to help Pope Francis adjudicate in such cases. No one knows anything about this either.

The commission also prepared child protection guidelines for distribution to bishops’ conferences worldwide. To date, they have remained in Rome and no one knows why.

Meanwhile, the commission is starved of resources. In evidence to Australia’s Royal Commission into Institutional Responses to Child Sexual Abuse last month, commission member Kathleen McCormack, herself Australian, said it had “a budget for what you would do in a diocese but we’re dealing with the whole world”. She said meetings of the commission were “infrequent.”

Another member, the UK’s Baroness Sheila Hollins, said the Vatican commission lacked the “administrative competencies to be able to run a very effective organisation” and that it did not have “the same level of support as the Royal Commission”.

A third member, New Zealander Bill Killgallon, agreed with Justice Peter McLellan, chair of the Royal Commission, when he said “the picture you all paint, from an outsider’s point of view, is of a world organisation which is struggling to come to terms with the safety of children and its responsibilities in that area”.

Baroness Hollins added: “I think the pope does understand the seriousness of it and I think there are many other leaders who do” but that in the Vatican there remained “some people struggling to come to terms with it”.

Here, too, spin has entered the equation. Following Marie Collins’s resignation from the Vatican commission last Wednesday, a certain “empathy” has been filtering from predictable Vatican quarters.

That she should resign was so understandable really, is the gist of this faux would-be-compassionate line. It might even be a blessing in disguise where she is concerned, it has been put.

Collins, it suggests, was in an invidious position where other survivors are concerned, as being part of the commission often left her trapped between loyalty to it and to fellow survivors.

This “enlightened” Vatican spin argues that survivors such as Ms Collins need to be free to speak out publicly to help keep the church honest, from the outside! Hers is an essential role, from the outside. Hers is a difficult role to play, from the inside.

Such “empathy” from Vatican bureaucrats is misplaced as it forgets, or may not be aware of, Collins’s 20-year plus history of successfully circumventing their counterparts in Dublin and at a national level in the Irish church where she helped prepare child protection guidelines while also withstanding outrageous slings and arrows from fellow survivors.

It is doubtful Collins will be moved by the new “understanding” currently wafting from some in the Vatican, the gist of which is that the commission for the protection of minors is better off without abuse survivors anyhow, now that they are at last rid of this “troublesome” woman.

Yes, like Sir Humphrey, some in Rome would prefer that commission members “never know more than they need to know” about clerical child sex abuse. And, no doubt, they would happily supply members with what they feel they need to know.

Then they can resort once more to those three great articles of faith held to so dearly by senior bureaucrats everywhere, that “it takes longer to do things quickly; it’s more expensive to do them cheaply; and it’s more democratic to do them in secret”.