Archbishop of Tuam ‘horrified’ by extent of deaths at baby home 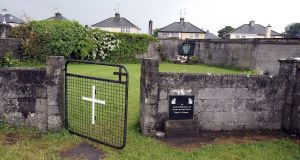 Shrine to babies in Tuam: people in the estate on the site of the home have mixed feelings about reinterment, saying a graveyard kept by the community had been blessed several times. Photograph: Paul Faith/AFP/Getty Images

Archbishop of Tuam Dr Michael Neary was “horrified and saddened” about the large number of children buried at the former Bon Secours home for mothers and babies in the town.

Speaking at 10.30am Mass in Tuam Cathedral yesterday, Dr Neary said his priority was to seek a “dignified reinterment” of the remains of children in consecrated ground – in cooperation with the families of the deceased.

However, residents in the Dublin Road estate built on the site of the former home have mixed feelings about reinterment, pointing out that a graveyard kept by the community for almost 45 years had been blessed several times.

Fine Gael councillor Peter Roche has also called for a period of “calm reflection” and “respect”.

“I am glad this information is out there and is dismissing speculation and rumour, but let’s not rush to judgment either,” he said. “The fact is that the Bon Secours order also did some very good medical work through its hospital in this town.”

The commission said on Friday that “significant quantities” of remains of babies and infants up to three years old had been uncovered in its test excavation in Tuam.

It said radiocarbon dating linked remains to the timeframe of the home, which was open from 1925 to 1961, with a number of samples likely to date from the 1950s. Further tests are being conducted.

Dr Neary said the commission’s work, “though difficult to read and comprehend”, was “another necessary step on the path to the truth”.

“This points to a time of great suffering and pain for the little ones and their mothers,” he said. “I can only begin to imagine the huge emotional wrench which the mothers suffered in giving up their babies for adoption or by witnessing their death.”

The bishop said some of these “young, vulnerable women” might have already experienced rejection by their families and that “the pain and brokenness which they endured is beyond our capacity to understand”.

“Regardless of the time lapse involved, this is a matter of great public concern,” he said. “I welcome the fact that the commission has already asked that the relevant State authorities take responsibility for the appropriate treatment of the remains, and that the coroner has been informed.”

The Tuam Babies Home Committee said the graveyard it had tended on former home ground for almost 45 years had been blessed several times. It has expressed the hope it will be consulted in any plans by the county coroner, Galway County Council and Health Service Executive West.

The Irish First Mothers, a group representing some 60 women who spent time in mother and baby homes, has said it believes it would be unwise to extend the commission’s terms of reference, following publication of the Tuam findings.

“The commission is too close to completing its work and is already overburdened,” the group said.

The Association of Catholic Priests said that the Roman Catholic church must take a “large degree of responsibility for what happened” to the women and children, because of its dominant position at the time in Irish society.

“Also, we must acknowledge that individual priests in parishes, through the advice they gave to parents of unmarried pregnant women, and in some cases through public condemnation from pulpits, helped to limit to mother and baby homes the options available to parents.”

The commission, established in February 2015 to investigate allegations of abuse at 14 institutions and four county homes between 1922 and 1998, is due to issue its final report next year.