Request for investigation comes after unsupported allegation of surveillance

U.S. President Donald Trump accuses former President Barack Obama of wiretapping him in October during the late stages of the presidential election campaign, but offers no evidence to support the allegation. Video: Reuters 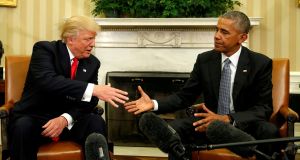 Former US president Barack Obama with then president-elect Donald Trump in the Oval Office of the White House, Washington, in November 2016. Photograph: Kevin Lamarque/Reuters

The White House on Sunday requested that US Congress examine whether the Obama administration abused its executive “investigative authority” during the 2016 campaign, as part of the ongoing congressional inquiry into Russia’s influence on the presidential election.

The request came a day after US president Donald Trump alleged, without supporting evidence, that then-president Barack Obama ordered a wiretap of the telephones in Trump Tower in New York, which was at that time Trump’s campaign headquarters.

He made the allegations in a series of tweets claiming he “just found out that Obama had my ‘wires tapped’ in Trump Tower just before the victory. Nothing found. This is McCarthyism!”

White House spokesman Sean Spicer said Mr Trump and administration officials would have no further comment on the issue until Congress has completed its inquiry, potentially heading off attempts to get Mr Trump to explain his accusations.

“Reports concerning potentially politically motivated investigations immediately ahead of the 2016 election are very troubling,” Mr Spicer said in a statement.

Spokesman for Mr Obama Kevin Lewis said a “cardinal rule” of the Obama administration was that no White House official ever interfered in any Justice Department investigations, which are supposed to be conducted free of political influence. “As part of that practice, neither President Obama nor any White House official ever ordered surveillance on any US citizen,” Mr Lewis said, adding that “any suggestion otherwise is simply false”.

Mr Trump compared the alleged activity to behaviour involving former president Richard Nixon and the bugging of his political opponents. “How low has President Obama gone to tapp [sic] my phones during the very sacred election process. This is Nixon/Watergate. Bad (or sick) guy!” he tweeted.

Under US law, a federal court would have to have found probable cause that the target of the surveillance is an “agent of a foreign power” in order to approve a warrant authorising electronic surveillance of Trump Tower.