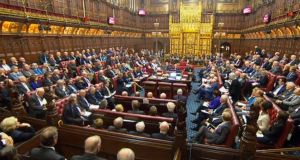 The British government faces the possibility of a second defeat in the Lords on Tuesday when peers debate an amendment to the article 50 legislation. Photograph: PA Wire

Ending free movement of people from the European Union is unlikely to reduce immigration to Britain or to offer a quick fix to low wages, the House of Lords EU committee says in a report published on Monday.

The report recommends offering preferential treatment to EU migrants after Brexit, rather than extending the work permit system currently applied to non-EU citizens who wish to work in Britain.

It argues that, since the majority of migrants coming to Britain are from outside the EU, controlling immigration from the EU would have a limited effect on the overall number.

And it says that some economic sectors in Britain which depend on migrant labour may be unable to find British workers willing to do the jobs.

“The precise manner in which the Government proposes to ‘end’ free movement is a pivotal aspect of the United Kingdom’s approach to negotiations with the European Union and could have far-reaching consequences for the UK’s future trading relationship with the EU,” the chairman of the committee, Usha Kumari Prashar, said.

“Crucial sectors of the economy depend on EU migrant labour, so it is essential that any changes don’t endanger the vibrancy of the UK economy. We therefore recommend a phased transition to avoid short-term shocks to particular sectors.”

The report follows last week’s vote in the House of Lords seeking to oblige prime minister Theresa May to guarantee the rights of EU citizens now living in Britain, within three months of triggering article 50 of the Lisbon Treaty to start formal Brexit negotiations.

On Sunday, a number of prominent Conservative campaigners for Brexit, including former justice secretary Michael Gove, joined a call by MPs to offer a unilateral guarantee that EU migrants currently in Britain would not be affected by Brexit.

Mr Gove and two other pro-Brexit former Conservative ministers, Peter Lilley and Dominic Raab, were on a committee of MPs who unanimously backed the call in a House of Commons report.

“EU nationals in the UK did not have a vote in the referendum. They came to the UK legally and have contributed to the UK economically and culturally and enriched UK society.

“The vast majority have worked hard, paid their taxes, integrated, raised families and put down roots. It is difficult to see what more the UK could have asked of them.

“ The result of the referendum, however, has made them very unsure of their future. Although the government has said it wants EU citizens to be able to remain, the committee notes that this has not offered sufficient reassurance that the rights and status that they have enjoyed will be guaranteed,” the MPs said.

The government faces the possibility of a second defeat in the Lords on Tuesday when peers debate an amendment to the article 50 legislation demanding that parliament should have a “meaningful vote” on any final Brexit deal before it is agreed.

The government has said it will resist any amendments to the Bill when it returns to the Commons and is seeking to dissuade anti-Brexit Conservatives from joining the opposition in support of the changes approved in the Lords.

Chancellor of the exchequer Philip Hammond warned on Sunday that Britain would “do whatever we need to do” to remain competitive if it failed to secure a satisfactory post-Brexit deal with the EU.

He told the BBC’s Andrew Marr that the government was prepared to slash business taxes to attract investment away from the EU if no new trade deal was agreed.

“If there is anybody in the European Union who thinks that if we don’t do a deal with the European Union, if we don’t continue to work closely together, Britain will simply slink off as a wounded animal, that is not going to happen. British people have a great fighting spirit and we will fight back.

“We will forge new trade deals around the world. We will build our business globally,” he said.