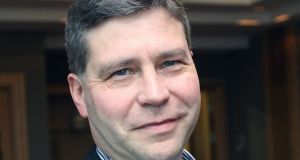 Kevin Lunney was kidnapped, beaten and brutalised, his leg broken, and his neck and chest slashed with a Stanley knife in a frenzied attack. Photograph: Lorraine Teevan

On the road from Derrylin in Fermanagh to Ballyconnell in Cavan, there is the Quinn bottling enterprise. This is now in Spanish hands. It is followed in quick succession by a variety of Quinn-created businesses in quarrying, gravel pits, cement silos and processing operations.

Over the years, they produced their own offshoots, making tiles, insulation, or other products, along with all of the administration buildings and offices needed to run such enterprises.

Looming over them all are the 18 giant wind turbines of the Slieve Rushen Wind Farm, built by Seán Quinn in 2008 but now French-owned, lost to him – like the other parts of his once multibillion empire – when he bet heavily on Anglo Irish Bank and lost.

What’s left of Quinn’s empire is run from one of two, two-storey redbrick office buildings remarkable only for the air of somewhat dull normalcy that attends them.

Here, the directors of Quinn Industrial Holdings (QIH) oversee a company that employs 830 people, almost all of them in Fermanagh and Cavan, and which they have returned to profitability, albeit carrying debt, despite a campaign of intimidation against them since 2011.

The company its now is 78 per cent owned by institutional American investors with the remaining 22 per cent split 50/50 between executive and non-executive directors. “Our sole goal,” said one, “is to keep [QIH]in local ownership and remain as a driver for the region.” Last year, it produced profits of €30 million before interest, taxes and other deductions.

Ten minutes after he left his office on Tuesday evening, QIH chief executive Kevin Lunney was kidnapped, beaten and brutalised, his leg broken, and his neck and chest slashed with a Stanley knife in a frenzied and depraved attack.

Quinn publicly condemned the attack as “barbaric”. Speaking on local station Northern Sound Radio, he said: “Any proper individual with a sense of morals would condemn that.

“My family is outraged as well and they fear that we will take flack for this,” he went on, adding that the attack “just doesn’t make any sense. That’s not what moral individuals do to each other.”

In the wake of the attack, Lunney’s colleagues have been left to consider his suffering, and the risks they now face. “Yeah,” says one of them reflecting on events, two days later: “Any normal individual in any normal society, coming in and looking at this, they’d say, ‘Why in God’s name are you there?’ But you slip into an almost defined routine – clear the diary for half a day and deal with it. And that’s the sad part.”

Lunney’s colleague, who spoke on condition of anonymity, was phlegmatic about having to cope with years of threats, abuse, lies and intimidation. Eight years on, it has become part of life.

“I suppose, we grew up in the Troubles and that exposure in your early years makes you that bit more resilient to some of this type of activity. And then the reality is, it starts and you slip into a mechanism of dealing with it day to day. . .”

However, that Troubles-bred ability to cope in tough times is now being tested to the limits by individuals widely believed to have connections to republican paramilitaries (historic and/or contemporary) with overlapping links to gangland elements, all of them acting on behalf of someone else – a person referred to by senior company figures as “the organiser”.

Kevin Lunney is active in his community and is well known across Fermanagh, partly through his involvement in the Fermanagh Trust. The attack on him “was a well-planned, well-organised abduction” that took time, numbers and resources to prepare, says a colleague.

When he left his office at about 6.30pm on Tuesday, someone had to be watching to alert the driver of a BMW car near Lunney’s rural home, near Kinawley, that their target was en route.

At that moment, just after Lunney’s wife, Bronagh, drove into their long driveway ahead of his own expected arrival home, the BMW moved across it to block his entering. Another car, a black Audi saloon, was nearby, waiting.

Lunney drove up to the blocked driveway and the BMW lunged across his path, blocking him. At his rear, the Audi moved into position, preventing him reversing.

The place to where Lunney was taken (assumed to be in Cavan) and beaten in a horsebox-like container, would have had to be identified and set up before his kidnappers brought him there, and watched over as they went about their beating.

After assaulting Lunney and dumping him at a crossroads some 12km west of Cavan town where he was found by a young tractor driver, all those involved had to disperse, including the people (almost certainly more than one) who flung him on the road. The black Audi has yet to be found, burnt out or otherwise.

All such sources will not publicly identify who they think is responsible, but they have their suspicions.

The fact is that since the IRA ceasefire and Belfast Agreement and consequent dismantling of virtually all manifestations of the Border, security in the area has been scaled back hugely.

“There was a time when you had 10 or 15 guards in Swanlinbar [the Cavan Border-crossing point believed traversed by the kidnappers] and 20 or 25 at Ballyconnell [the Cavan town next to the Quinn enterprises in Fermanagh],” said a Garda source.

“There is no longer a 24-hour station in Ballyconnell and I’m not sure there’s anyone in Swanlinbar.

“On the other side then, when you cross into Derrylin [in Fermanagh], you’ve got to go all the way to Enniskillen before you find a policeman. Lisnaskea [east of Derrylin in Fermanagh] would have had a massive police presence at one time.”

So the veneer of post-agreement normalcy and related low-level policing is also a happy hunting-ground for a campaign of intimidation and harassment.

Last May, five named QIH directors – Liam McCaffrey, John McCartin, Dara O’Reilly, Kevin Lunney and his brother Tony Lunney – were told by letter to QIH head offices that if a proposed sale of the wind farm was not stopped “we [the senders] will be implementing a permanent solution for at least one of the above”.

A copy of the letter, merely the latest in a litany of threats, was sent also to Carson McDowell, a high-profile law firm in Belfast.

Gardaí advised the directors not to stop on the road if any stranger tried to flag them down, not to park their car up against their home (if set on fire, the house can go up also) and to consider having a safe room in the house where they could hide if attacked.

After some 70 individual instances of threat and intimidation over many years and actual assaults on two directors, could the police have offered them enhanced protection?

“There are five [directors] to watch,” said another company source, “and that’s five multiple moving targets and their families and that’s very difficult to protect.”

Trying to maintain an appearance of normality has been a conscious decision by the company, in terms of director security.

“We’ve never gone down that road and I’d rather not,” said one senior source. “We live in this community. We are part of this community. If you start that, where do you finish?