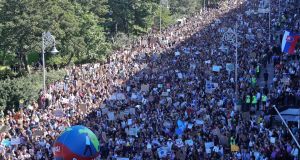 The Stop Climate Chaos Coalition has said Friday’s mass youth demonstrations should prompt the Government to commit to greater leadership at next week’s high-level UN Summit in New York.

The coalition, which represents a range of civil society organisations, advocacy groups and charities, pointed out that even though it was a youth driven event, it was joined by citizens, trade unions, community groups and faith leaders.

“The young people of Ireland have sent a loud and resounding message to the Government,” said Áine O’Gorman, activism support coordinator.

“Failure to deliver the appropriate level of ambition now not only ignores the latest science on the scale of action required but also jeopardises the future of our young people.”

Among the SCCC’s members are Bird Watch Ireland, Concern Worldwide, Oxfam, Trocaire, the Irish Cycling Advocacy Network and Irish Doctors for the Environment.

“One way Ireland can show leadership is by the Taoiseach signalling clear support in New York for a more ambitious EU target for cutting emissions pollution by 2030,” said its head of policy Catherine Devitt.

‘Nail in the coffin’

“Ireland’s failure to join other member states calling on increased ambition would be a nail in the coffin of the Government’s stated intention to move Ireland from climate laggard to climate leader.”

Its uncompromising language was emboldened by thousands of protestors turning out across the country on Friday and echoed by other organisations.

Tony Lowes of Friends of the Irish Environment said the public turnout was a vindication of its High Court action against the Government’s climate mitigation strategy, even though its efforts ultimately failed on Thursday.

“I think it was enormously encouraging after (the) decision by the courts to allow the National Mitigation Plan to stand that so many people are on the streets today saying exactly what we were saying in court. It’s a very exciting convergence of events,” he said.

In the build up to Friday’s mass demonstration, An Taisce the conservation body said young Irish people “have done the least to drive this crisis, yet will suffer the most in the years and decades ahead”.

“They are entitled to express their anger and their frustration at our inaction, and they are also entitled to expect our full support and solidarity.”

The turnout and support from civil society and NGOs will make Friday’s day of action difficult for the Government to ignore or merely play lip service to.

Even the Irish Animation and Film Industry expressed disapproval of its efforts in a letter to Minister for Climate Action Richard Bruton signed by 360 of its members.

“It should not fall on the shoulders of young people to communicate the seriousness of this crisis to the Government,” it said, repeating a well worn mantra.

“We call on the government to enact more ambitious plans to halt biodiversity loss and reduce greenhouse gas emissions to net zero ahead of the current goal of 2050.”

The International Federation of Journalists said citizens “cannot rely on hypothetical promises, we need world governments to adopt and respect a proper plan of action. Now.”

Meanwhile, NUI Galway chose the day of mass protest to announce a series of free public lectures on climate justice.

“Human rights lawyers and advocates need to hold states to account for the continuing failure to meet our legal obligations on climate change, and our obligations to future generations to address this issue now,” said Professor Siobhán Mullally, director of the university’s Irish Centre for Human Rights.

1 Coronavirus: Varadkar returns to practising medicine to help during crisis
2 Coronavirus: Number of Irish cases nears 5,000 as 21 further deaths confirmed
3 Donald Trump’s clown car administration has put the fear in all of us
4 Robbie Lawlor profile: A feared criminal with a long list of enemies
5 Fewer deaths in Veneto offer clues for fight against coronavirus
Real news has value SUBSCRIBE