How climate-action children are winning over parents

‘Iona’s always giving out to me about driving, this year we decided not to do any air travel’ 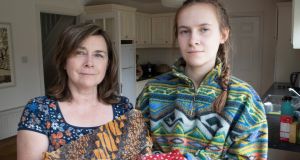 Áine Nic Chárthaigh, a mother of one in Limerick City, has always considered herself a fairly committed environmentalist.

That was until her daughter, Iona (17), began to get on her case.

“She’s picking me up on anything where I can be more environmentally-friendly,” she says. “ If she catches me with plastics of any kind, she’s constantly pointing it out. We’ve no clingfilm now. It’s beeswax wraps.

“Iona’s always giving out to me about driving. So, this year we decided not to do any air travel for the family holiday. And she wants to be vegan and vegetarian, so we’ve dramatically reduced our meat consumption in the house.”

Some parents might roll their eyes and see these demands as just another passing teenage fad. But Áine thinks something bigger and much more fundamental is happening.

“Young people are taking ownership of issues around climate change,” she says. “They’re reading the reports themselves on this – I don’t even know adults who do that. They are highly committed and influencing the rest of us . . . It means we all have to change our ways. It requires a bit more effort, but in the greater scheme of things, it is worth the effort. And it’s down to this generation.”

Iona was one of thousands of young people marching through the streets on Friday demanding that adults in power take action on climate change. While the jury is still out on how effective the movement will be, there are early indications that young people may actually be highly effective in changing the behaviour of adults.

A team of social scientists in a US university recently authored a study which found that children can increase their parents’ level of concern about climate change because, unlike adults, their views on the issue do not generally reflect any entrenched political ideology.

Researchers tested how 10- to 14–year-olds’ exposure to climate change coursework affected not only the youngsters’ views, but those of their parents.

Danielle Lawson of North Carolina State University, the paper’s lead author, says: “This study tells us that we can educate children about climate change and they’re willing to learn, which is exciting because studies find that many adults are resistant to climate education, because it runs counter to their personal identities.”

She says it “also highlights that children share that information with their parents, particularly if they’re given tools to facilitate communication – and that parents are willing to listen”.

Some students at North Wicklow Educate Together Secondary School in Bray are seeing this first hand. Their awakening to climate activism came in the classroom in the form of an hour a week course on sustainability that was trialled in their school.

It sparked a group of them to form Student Climate Activist Network, which was one of the groups centrally involved in mobilising Friday’s protest.

Gráinne O’Sullivan (14) says the group has helped their families to make positive and sustainable changes in their lifestyles – more vegetarian meals and rethinking modes of transport and other lifestyle changes.

But, she says, this is only the start.

“Individual actions are so good and they make people aware – but it’s not enough. We need systemic change. Buying a bamboo toothbrush isn’t going to save the planet.”

As much as they see adults in power as being part of the problem, they also see them as the solution. In a change from earlier protests, Friday’s strikes explicitly invited adults and campaign groups to join them in their demonstrations.

“They are standing behind and alongside us, but not in front of us and are conscious not to block our voices,” she says. “Then there are adults in the Dáil . . . who are a bit of an obstacle, but we need them to help us to get to where we want to be.”

There’s a recognition among the students that if adults are to be won over, then changes will have to be affordable and accessible to all. Simply hoping people will accept higher taxes or buy expensive electric cars, they say, isn’t realistic.

“One of our demands from the Government is to make [action on climate] socially just – and that means ensuring people’s everyday lives are as affordable and sustainable as possible,” says Lucy Sky Dunne (14).

Given growing anxiety levels among young people today, there are some who worry that we are making things far worse by encouraging protest; surely, we should let children be children instead of eco-worriers and let adults shoulder with the world’s problems?

“We weren’t forced into this,” says Gráinne O’Sullivan. “We saw the inaction of the governments and people in power and we took that step to make our voices hear . . . It’s our future which will be affected.”

While youth-led campaigns have persuaded adults in power to put climate issues to the fore, tangible political successes are few, so far. In business, however, the eco-awakening is having a distinct impact.

Jane McDaid, founder of youth marketing agency Thinkhouse, says she sees businesses who are fundamentally rethinking how they do things to be more responsible and sustainable.

“I think the days of ‘greenwashing’ are over – young people are far too smart and when they witness greenwashing, they’re motivated to call it out which ends up being a huge embarrassment to brands/organisations,” she says.

“Brands know that younger consumers are voting with their wallets and they are supporting brands and businesses that are truly aligned with their values.”

According to the NYU Stern School for Sustainable Business, between 2013 and last year, sustainably marketed products grew 5.6 times faster than those not marketed as good for the planet.

Unilever’s Sustainable Living Brands grew almost 70 per cent faster than the rest of the business and are delivering 75 per cent of the company’s growth.

Adults, it seems, are catching on fast due in no small part to the zeal of younger people – and their ability to influence their parents.