Millions of Europeans take part in strike for climate action 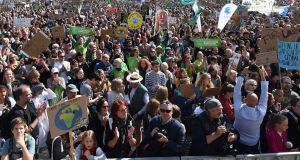 From Barcelona to Berlin, students skipped lessons and dragged their parents and grandparents along to protests marking the first anniversary of Greta Thunberg’s solo sit-down school strike in Stockholm.

As the Fridays for Future founder prepares to berate world leaders at next week’s UN climate conference, climate demonstrators came together in European cities to put their leaders on notice.

Speakers in Paris, Warsaw and London were united in their message: slash subsidies for fossil fuels and switch European economies as soon as possible to 100 per cent renewable energy.

“As we deal with devastating climate breakdown and hurtle towards dangerous tipping points, young people are calling on millions of us across the planet to disrupt business as usual,” said Fridays for Future organisers in their call for protest.

A recent survey by the European Commission found 93 per cent of Europeans were seriously concerned about global warming.

In Paris, thousands marched from Place de la Nation, while in Helsinki a demonstrator outside parliament dressed up as Santa Claus held up a sign announcing “My House is on Fire”.

Scores of Brussels protestors turned out on Friday with signs reading “The warm earth destroys our cold beer” and “I won’t go to school until you make it cool”.

It was a similar scene in protests across the UK: in London students gathered at Parliament Square demanding lawmakers ramp up climate action. Signs included “Don’t be a fossil fool” and “Make our planet Greta again”.

“If politicians were taking the appropriate action we need and had taken this action a long time ago . . . then I would be doing the maths exam I have studied for,” said 16-year-old Jessica Ahmed to German broadcaster DW.

In Germany, student protest was given a boost when churches, unions and even civil service organisations urged their members to skip work for protests in all most every German city, big or small. On Friday evening police spoke of at least 1.4 million on the streets.

The quays around Hamburg’s Alster lake were flooded with up to 100,000 angry protestors; in Berlin, organisers said an estimated 270,000 people marched through the city and gathered in sunshine at the Brandenburg Gate.

Throughout the crowd, people spoke of the changes they have made to their lives in the last year, with pre-teens to early retirees all saying they had cut down – or cut out entirely – meat, plastic packaging and air travel.

A group of stylish teenage girls beside the Holocaust memorial said they had switched to second-hand clothes stores from fast fashion.

One of them, 13 year-old Mia Corff from southwest Berlin, said her entire school and circle of friends were now energised.

“We had Martin Schulz of the Social Democrats in and I think we overwhelmed him a bit with our questions and demands,” she said, clutching her sign showing a nuclear plant cooling tower and a tree, reading “Pick a Side.”

Elmar Fleischer, a 50 year-old Berlin psychotherapist, said he had come out to face his climate fears.

“When I was young, I remember thinking that things would only change in climate policy when the trees started dying before people’s eyes and now I see dying trees here every day,” he said.

“I’ll be dead myself before things get really unpleasant on this planet but it stresses me so much to think how things are going to be for my son unless things change quickly.”

Further blockades were planned throughout Berlin in the evening organised by a group calling itself “Extinction Rebellion”.

Berlin strikes began at 7am with a cycle demo that blocked a major intersection in western Berlin. Other spontaneous sit-down blockades throughout the day made traffic in central Berlin grind to a halt – creating unprecedented, emissions-choked tailbacks throughout the German capital.

Berlin’s party people held a street rave around a truck on Potsdamer Platz emblazoned with signs reading “No Planet No Rave” and “This is the only planet with Techno”.

“My boss told me not to work and come to the march instead, the energy today feels like the tipping point,” said Uwe Thomalla, a 34 year-old working in the “sustainable travel” business.

Protests continued across the continent into the evening in mild early autumn weather. In Poland, every major city saw climate protests – directed against a national coal-heavy energy policy that has secured the country two thirds of the EU’s most polluted cities.