Lack of transparency over dental complaints blamed on laws 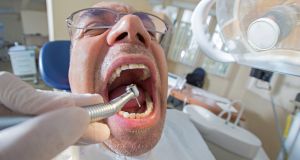 Of six cases heard by the Dental Council since 2015, none has resulted in a dentist being struck off. Photograph: iStock

More than 760 complaints have been made against dentists over the past five years, most of them relating to treatment issues, new figures show.

Last year the Dental Council was contacted by 126 patients with issues over the treatment they received. Treatment issues were raised in 76 per cent of complaints, “behaviour” in 36 per cent and fees in 12 per cent.

The council says most patients are looking for advice rather than wanting to make a formal allegation of professional misconduct.

Only a small minority of contacts – 11-16 each year – result in patients being invited to make a written complaint and fewer still result in the holding of a fitness-to-practise inquiry, according to data provided by the council.

The number of fitness-to-practise hearings held by the Dental Council varied from none to three in each of the years since 2014.

Dentistry is unique among Irish health professions in that fitness-to-practise hearings are held in private. While the Dentists Act 1985 does not explicitly state hearings have to be in private, this has been the practice since they began. Medicine, dentistry and other health professions, governed by newer legislation, generally hold disciplinary hearings in public.

Of six cases heard by the Dental Council since 2015, none has resulted in a dentist being struck off, although two dentists were censured.

Under the legislation, the council can publish the report of an inquiry only if there are findings of professional misconduct, according to its registrar, David O’Flynn. Effectively, this means fitness-to-practise matters must be held in private unless the dentist agrees to a public hearing.

No dentist appearing before the fitness-to-practise hearing has ever agreed to a public hearing.

Last April the High Court, in a publicly reported decision, imposed conditions on the registration of Dr Evelien Van Amerongen. But because the council’s finding against Dr Van Amerongen was not one of professional misconduct, it could not publish the outcome of the case.

“The council will usually publish any sanction which restricts a dentist’s practice in some way, such as conditions, erasure or suspension,” Mr O’Flynn said. “It may publish sanctions of advise, admonish or censure if it considers it is in the public interest to do so.”

The council has 19 members, seven of them elected by the profession. Although dentists theoretically occupy a minority of places, because the third-level training institutions nominate dentists with academic teaching positions, the profession has an effective majority on the council. At present, 12 of the 19 members are dentists.

SUSAN’S STORY: PROHIBITED FROM SITTING IN ON HEARING

Susan* says she contacted the Dental Council with a “very serious complaint” about a dentist in October 2013. She provided the council with detailed information about the case, which has been the subject of a large out-of-court settlement.

In November 2018, more than three years after she had last heard from the council, she was told a fitness-to-practise hearing would take place the following month.

Although she was asked to confirm her attendance, she was told the fitness-to-practise committee would not be imposing a strike-off or suspension on the dentist. This decision, she was told, was based on the finding of an expert report that no professional misconduct was involved.

She says she asked for a copy of the report, the full name of its author – an Irish-based expert – and the names of the members of the committee, but was refused this information.

She attended at the Dental Council on the appointed date last December but was told by its legal advisers she was prohibited from sitting in on the hearing.

“Counsel agreed with me that the Dentists Act 1985 does not stipulate that inquiries are to be held in private. The alleged hearing went on without me being present,” she says.

She says she waited in the council’s kitchen for three hours. She was then told the committee did not want to hear her evidence, no finding of professional misconduct had been made and the case was closed.

She complained formally to the council, whose registrar, David O’Flynn, replied saying it “cannot consider your complaint”.

She wrote again to the council threatening to take things further but has had no further communication from it.

Earlier this year she made a complaint to the ombudsman, who replied saying it had limited powers in relation to the Dental Council and so would not be investigating the complaint.

Asked about Susan’s complaint, Mr O’Flynn told The Irish Times he could not comment on individual cases. However, he said that while the Dentists Act 1985 did not explicitly state fitness-to-practise hearings should be held in private, the practice since it was introduced followed that of the Medical Practitioners Act 1978 (this has since been superseded in relation to hearings involving doctors).

Two competing rights, that of the dentist and that of the patient making the complaint, have to be balanced at fitness to practise hearings, he said, and “sometimes they collide”.

Under the process, once a complaint is taken up by the council, it ceases to “belong” to the complainant and falls to the registrar of the Dental Council to progress. Mr O’Flynn said he had to be confident an allegation would amount to professional misconduct before proceeding, and in this regard he would usually rely on an expert report.

The council has never chosen an expert witness from abroad but it was confident the experts it uses are “independent-minded” and operate “at arm’s length” from the 3,500 members of the profession, he said.

At the hearings, patients, even if they are called as witnesses, may only stay on with the consent of the dentist’s legal team, he said. The nine-member fitness-to-practise committee picks three people to hear a particular case, including one non-dentist.

Mr O’Flynn said the council recognised the shortcomings of the current legal situation but expressed the hope these would be remedied in forthcoming legislation.

* Not her real name. Susan says she was traumatised by her experience of dentistry during her teenage years and wishes to maintain her anonymity

Coronavirus: Ireland’s infection peak has passed, but death toll could hit 400 by May, report says