Excited and enraged, children take to Dublin’s streets as part of global protest 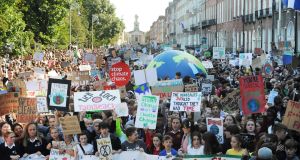 Shortly before 2pm on Friday the sometimes excited and sometimes enraged chatter of the young people flooding three sides of Dublin’s Merrion Square came to a sudden stop and was replaced by the trill of thousands of mobile phone alarms chiming as one.

Under instruction from the makeshift stage, the alarms had been set for exactly 13.49 to allow the children who had just become part of the largest global climate protest in history to send a message to Leinster House: it was time to wake up to the emergency facing the planet.

More than 10,000 young people took to the streets around Merrion Square with speakers and marchers criticising Government inaction on the emergency and demanding more be done by those in power to safeguard their futures.

Harry Ennis, a first year student at Dublin’s Mount Temple Comprehensive School, was at the starting point at the Custom House early. He said he was taking to the streets “because if we start doing something about it now we can maybe reverse climate change but we have to do it now before it is too late”.

He said climate change was something he and his classmates “think about a lot because it is our future that is going to be most impacted”. And when asked if he had a message for the older generation who had contributed so much to the crisis, he didn’t miss a beat. “If you work to stop climate change happening then all is forgiven, we not going to be angry with you but you need to start working at it now”.

As he spoke an almost endless steam of children carrying placards passed him by.

“I have seen smarter cabinets at IKEA,” a particularly caustic one. “If you don’t care about the polar bears then think about your children,” said another. “Dinosaurs didn’t know what was coming but we know,” was one of many referring to an earlier mass extinction.

Emma Carrick wasn’t carrying a placard but the geography teacher was looking after a whole class of students from Coláiste Bríde in Clondalkin who were. “They are mad into this and they wrote to the principal and asked if they could come to the march,” she said.

The principal readily agreed. “They wanted to be here to send the Government the message that the planet really matters. I think these girls do have sense of despair and a march like this is so important because the message simply has to get through that more needs to be done.”

As she spoke a man wandered through the crowd carrying a large holdall and blowing one of the dozens of whistles he had draped around his wrist. “Are those whistles free?” a marcher asked.

“Are they free,” he repeated with a laugh. “No, they are two euro each or three for a fiver. You have to be heard as well as seen.”

When asked how business was he was taciturn. “Oh I couldn’t be saying that but I’ve sold a fair few.”

At midday the protest started to move slowly from the Custom House down the north quays across the river and towards Westland Row and Merrion Square. As the march snaked through the city onlookers applauded. Even motorists, inevitably delayed by the march, honked their horns in support.

On the stage set up in the shadow of Leinster House speaker after speaker urged the Government to do more and to take the climate emergency more seriously.

Sarah Lees was among the younger children listening. The sixth class student from Rathfarnham Parish National School said she and her classmates had come to “encourage the Government to stop climate change and maybe if we work hard enough then they will listen,” she said.

Her school principal Joyce Perdue had joined the march too. “This is about giving children a voice and maybe if they make enough noise they will it be heard.”

She wasn’t alone in expressing such a view. As the protest came to an end a group of five young people aged between eight and 10 took to the stage and announced that they were all from the No Plan B club.

Taking turns to speak they asked simple questions which they hoped those in power would hear. “When you were 10, did you ever think that your world was going to flood or melt or go on fire or that your species would be extinct?” they wondered.

And they addressed Blackrock College directly as the “prestigious school” which had urged parents not to support the climate protest.

One of the eight-year-olds on the stage said that “it can’t be a very good school because they think that the way to tackle this emergency is to turn off the lights for an hour. Is it better to sit in the dark and learn about history or be here with us making history,” the child wondered in a soft voice.

It wasn’t a bad question.