‘No smoking, no drinking and no men’, contributed to woman’s longevity 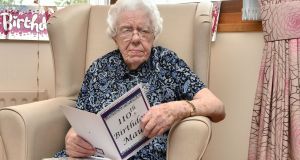 The late Maud Nicholl on her 110th Birthday with family and friends at Glenkeen nursing home in Antrim last July. Photograph: Colm Lenaghan/Pacemaker

The oldest person on the island of Ireland has died aged 110 years.

Maud Nicholl, who celebrated her birthday in the summer, died in her sleep at Glenkeen House care home in Randalstown, Co Antrim.

Born in 1909 in Ballymena, Ms Nicholl worked in a bank but gave up her job when her father became unwell.

She moved to the Woodgreen area near Ballymena in the early 1970s. She moved into the care home prior to Christmas 2018.

In a statement on Friday, the care home said Ms Nicholl was an inspiration to many.

“We celebrated her birthday on 3rd July this year and enjoyed her holding court at that very special event,” the statement said.

“Maud loved to share stories of her life, particularly her childhood and was always full of joy. Maud had a sharp wit, a twinkle in her eye and a penchant for straight talking. Her love of singing, good craic and her pleasant nature will all be long remembered by the staff in Glenkeen.”

One member of staff at the home, staff nurse Preschela, said Ms Nicholl was “a joy to be around and a joy to have known over a very short time whilst living in Glenkeen House”.

Councillor Beth Adger (DUP), deputy mayor of Mid & East Antrim Borough Council,and a friend of Maud’s said her “dear friend” was “a joy to be near, always laughing, she had a great sense of humour”.

“At her 108th birthday party at the Tullyglass Hotel she was asking all the reporters if they were married and they were keeping her going that she was still looking for a man,” the councillor said.

“She was always telling about the old times, she had been through so much . . . including living through two World Wars.”

Mrs Adger said Ms Nicholl was able to retain her independence and lived alone in a two-bedroom house until last year. She moved to the care home after a fall.

“She loved it in Glenkeen. The staff there were very good to her. She had many friends there and they all loved her to bits.”

Asked about the secret to her long life, Ms Nicholl had said she was “always quite happy” and “never worried too much”. On another occasion she attributed her longevity to “no smoking, no drinking and no men!”.