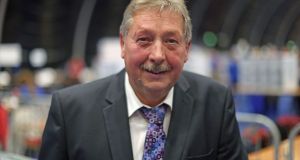 Almost six hectares of land [14 acres] could become a border control post at the port of Larne from next year, the area’s MP has told the House of Commons.

The DUP’s Sammy Wilson produced a letter during Prime Minister’s Questions on Wednesday which he said instructed the port’s management to prepare for it to become a border control post.

The letter stated that “14 acres of land has been looked at for car parking, for lorry parking and for construction,” the East Antrim MP said.

There are already some checks on agri-food products entering Northern Ireland from Great Britain. In a command paper setting out its approach to the Northern Ireland Protocol published last month, the UK government said it expected to designate Larne port for live animal imports, and expanded infrastructure would be needed at some other locations for the purpose of agri-food checks.

It said there would be not be construction at points of entry where no plant or animal health checks are currently carried out.

In his question to British prime minister Boris Johnson, Mr Wilson asked him to explain “how Northern Ireland can remain a full part of the United Kingdom if people coming from the rest of the UK into Northern Ireland have to pass through a border control post?”

“Would he advise management to tear this letter up as well?,” he asked.

The UK prime minister, Boris Johnson, replied that he had not seen the letter, “but I can tell him absolutely categorically that there will be no new customs infrastructure for the very simple reason that, under the protocol, it is absolutely clear in black and white that Northern Ireland is part of the customs territory of the whole of the United Kingdom.”

The Ulster Unionist MLA Doug Beattie raised the UK prime minister’s response at a meeting of the Northern Assembly’s Executive Office committee later on Wednesday, with the junior minister, the DUP’s Gordon Lyons, responding that Mr Johnson had “made it very clear there’s not going to be any new infrastructure.

“We have legal obligations under the Protocol in regards to agri-food and some of the measures that are going to have to be put in place there, but we want to make sure that we minimise friction and we minimise disruption and we’re completely united around the Executive table in regards to that.”

His fellow junior minister, Declan Kearney of Sinn Féin, added that allowance had to be made for the “mixed messages that comes from the British government” and the “confusion” between border control posts and customs infrastructure.

The Sinn Féin MLA and former MEP, Martina Anderson, said Mr Wilson had asked “specifically about border control posts in Larne and the British prime minister answered him about customs infrastructure. It’s like an apple and a banana, two different things.”

Mr Kearney said the Department of Agriculture, Environment and Rural Affairs (DAERA) had been designated as the lead department and was in compliance with the requirements set out in the Protocol.

He said its current focus was on ensuring that the plans for the control posts would be ready by the end of the month. The “timescales are challenging”, he said, but “the intention is to as close as possible meet the terms of the Protocol by the first of January.”