Tributes paid to farmer killed in accident on cross-Border farm 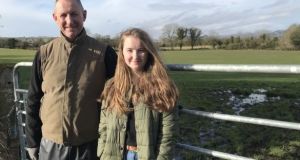 David Crockett and his daughter Rebecca on their farm at Coshquin, which straddles the Border between Derry and Donegal.

Tributes have been paid to David Crockett, who died in an accident on his farm straddling the border between Derry and Donegal on Monday evening.

The Health and Safety Executive in Northern Ireland confirmed it was aware of the incident and was making enquiries. “Our thoughts are with the deceased’s family at this tragic time,” a spokesman said.

It is understood Mr Crockett died in a fall from a farm shed. His son was also injured.

Mr Crockett became a well-known figure in the national and international media following the Brexit referendum in 2016. The border between Derry city and Bridgend, Co Donegal, runs right through the family farm at Coshquin.

His greatest concern was a hard border, and Mr Crockett - who was a distant descendant of the famous American frontiersman Davy Crockett - vividly described what it would mean for the family farm - which had been split by Partition - and how they had farmed there despite customs posts and the Troubles for more than 100 years.

In his most recent interview with The Irish Times, just before the UK left the EU in January, he spoke of his relief that a hard border had been averted and there was now some degree of certainty about the future. “Europe will look after Northern Ireland’s interests,” he said.

His friend Gordon Elder, who sat with him on the Board of Governors at Groarty Primary School, where they were once pupils, said he had accurately described the “practicalities of being on the border” and he would miss hearing his “big laugh” as he arrived at church on Sunday morning.

“This would have been one of the biggest funerals in the area,” he said. “It’s so frustrating for the community, because of the Covid-19 restrictions. I would have been at the Crockett family’s door today, with my condolences, and at the wake, but the family know our condolences are with them at this time.

“Any tributes he gets are richly deserved,” he said.

The clerk of session at Burt Presbyterian Church, James Buchanan, told BBC Radio Foyle he sat beside Mr Crockett in the choir every week.

BBC Northern Ireland political correspondent Enda McClafferty said that not only had Mr Crockett “the most unusual story, he the most unusual name, given where he lived on the frontier, and then he was able to tell it as well as he could.

“As soon as you landed in the farmyard you were made to feel so welcome,” he said. “We could not have been in a better place speaking to a better person about the [BREXIT]story because he brought it to life for people.

“Up until then people heard about the problems of the border and farming communities but they never heard it first hand from somebody who was living it every day. David loved to illustrate everything in terms of walking across one field and saying we’re in the Republic, and then saying all of a sudden we’ve crossed the border into Northern Ireland.”

The Sinn Féin MLA and former MEP Martina Anderson said the local community was “shocked and saddened” by Mr Crockett’s death, and her thoughts were with his family, friends and loved ones.

The Foyle MP, the SDLP’s Colum Eastwood, said he was sorry to hear of Mr Crockett’s death, and his thoughts and condolences were with his family and friends.

He is survived by his wife, Margaret, and three children.

1 Coronavirus: Non-essential travel from US set to be banned within days
2 ‘Our hearts are broken’ – implications of fresh lockdown sink in
3 Portlaoise locked down: ‘Our older clientele haven’t been back’
4 Google to roll out software fix to remedy issue with Covid app
5 New call centre at Dublin Airport to track arriving passengers
Real news has value SUBSCRIBE