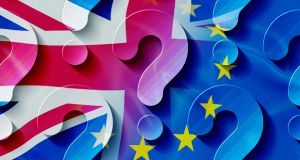 The Confederation of British Industry has warned that firms are not ‘remotely prepared’ to ready themselves for a no deal Brexit amid the pandemic.

As Boris Johnson’s government is increasingly mired by its handling of Covid-19, we should not forget that another crisis looms on the horizon.

For the first time since 2016 Brexit has not been at the centre of the news agenda – and all it took was a pandemic of unprecedented scale and character to eclipse it. But thanks to the latest rounds of negotiations, Brexit has made its triumphant return to the headlines. Unfortunately, though not unsurprisingly, the news from Europe does not look good.

Michel Barnier, the EU’s chief negotiator, warns the situation is dire and his sentiments are shared in Paris and Berlin. In Dublin, observers say the picture is as bleak as it has ever been. And you would be hard-pressed to find anyone in Westminster who thinks the UK and the EU are likely to strike a deal by the end of the transition period (though most concede that it is certainly not impossible).

As coronavirus has taken up the political and administrative bandwidth of every European nation, it is perhaps unsurprising that negotiations are a little behind schedule. But it also seems goodwill between both sides is running at a critical low. We are all too familiar with the charade: The EU criticises the UK for cherry-picking, the UK accuses the EU of intransigence and very little progress is made.

No matter how tempting it is for either side of the negotiating table to indulge in this well-choreographed Brexit blame game, the unfortunate reality is that time is fast running out. The detailed, line-by-line negotiation required to hammer out a consensus on tariffs, customs, fisheries and data-sharing simply cannot be done in the few months remaining. Not least when negotiators cannot be in the same room as one another thanks to travel restrictions and social distancing rules.

Given this, the repeated assertions from the government that the UK will not seek an extension to the transition period appears to occupy the realms of sheer lunacy.

The Confederation of British Industry has warned that firms are not “remotely prepared” to ready themselves for a no deal Brexit amid the pandemic. Trade expert Dr Anna Jerzewska said: “We don’t really know what’s going to happen on the border on 1 January . . . We’re not ready and we’re not entirely sure what we need to be ready for.”

It is, then, remarkable that Johnson and his close-knit pack of advisers in No 10 have little interest in buying themselves more time. It is no secret that the EU would welcome it. And it would offer vital breathing room to Johnson as he tries to recoup whatever goodwill he can from the public. But instead, he looks intent on delivering on his mantra of “Get Brexit Done,” come what may.

There is a crucial difference to the two crises on No 10’s hands. Though it may be fair to criticise the government for its “too little too late” approach to quelling the spread of coronavirus, perhaps some leeway can be offered to an administration grappling in real time with a pandemic that no politician has seen the likes of in their lifetime. Grave mistakes were made – but Johnson did not choose to have his premiership defined by the arrival of a deadly virus on Britain’s shores.

However, as we turn our attention to Brexit, and witness in slow motion the economic car crash the UK is about to subject its voters, devolved regions, and so-called oldest and closest neighbour to, we should not forget that this awaiting catastrophe is entirely by design.

Johnson chose to draw Britain’s negotiating red lines so harshly, to make a bogeyman out of Berlaymont and its officials, to fight an election on the back of hard-Brexit rhetoric and to expunge the government of all Brexit sceptics.

It is no new observation that this is a government driven by Brexit ideologues. We can, in part, explain away the refusal to seek an extension by this simple fact. But as the economy splutters to a halt, likely to be on its knees come January, the refusal to seek an extension only serves to compound the view that Brexit as an ideological project has stripped the government of any sense of basic pragmatism.

What the UK is facing in January 2021 is not an ideological crisis, nor is it a political one – Boris Johnson has an 80 seat majority and can have whatever type of Brexit he pleases. Rather, the UK is looking at a total systems failure thanks to imposing an ill-defined and ill-conceived Brexit on a country still coming to terms with the tragedy coronavirus has wrought.

As the rhetoric heats up and the shape and character of Brexit looks increasingly difficult to predict, it is hard to avoid the conclusion that the UK government is shovelling coal into the engine simply to drive a train off the cliff. And when the impacts are felt – and they will be felt – we should not forget that it was a choice.

1 Coronavirus: Warning against blame game as 46 more cases are confirmed
2 Why are there so many angry dads?
3 Two people die after car plunges off road and overturns in river
4 ‘I’m pretty sure that if I had been somewhere else they would have just let me die’
5 John Hume, architect of peace process, dies aged 83
Real news has value SUBSCRIBE